More than 400 Manipuris ponies will be kept at the Lamphelpat grazing field.

Manipuri ponies that were seen straying on streets in and around Lamphel area in Imphal due to lack of grazing field have been moved to Lamphelpat Kombirei grazing ground.

The stray ponies and horses were causing not only nuisance, inconveniences to the public and traffic but also causing several vehicle accidents, leading to even losses of many human lives, director, veterinary and animal husbandry Ng Ibotombi Singh had pointed out earlier.

Following it, Chief Minister N Biren Singh had instructed Manipuri pony riders to take care of their horses and not let loose them in the streets for the welfare of the ponies and to avoid traffic congestion.

Pony owners, who do not have stables, should keep their horses at Lamphelpat pony grazing field or at the grazing field which is allocated at Marjing, Biren had said.

Stringent action will be taken against pony owners if the ponies are seen in the streets of Imphal after the government had allocated grazing fields for ponies, the chief minister said.

The Manipuri pony riders guided the ponies that had strayed in and around the Lamphel area towards Lamphelpat Kombirei Leikai through Kendra Vidyalaya Road, Lamphel, Imphal West.

However, when the ponies were sent to the grazing field which the state government had allocated, some of the farmers attempted to block the path with bamboos. The farmers stated that the land was a paddy field and ponies cannot be kept in the crop fields.

A heated argument between the farmers and members of the Manipur Horse Riding and Polo Association took place. After producing documents regarding the land in front of a team of Lamphel police station who came to monitor the situation, the ponies were moved to the grazing ground.

Loumi Kanba Kanglup, Lamphel, general secretary Nongmaithem Ibohal Meitei, who is also a farmer, said the field was being utilised by the farmers since 1964-65 as paddy land.

The government had allocated grazing fields for Manipuri ponies at Marjing and Green Park, Lamphel. However, after looking at the convenience, the ponies were forcibly moved to the field for grazing, he added.

The farmers agreed after considering the chief minister’s statement, but it is not the right step. Farmers have been facing a huge problem as they will not be able to use the field as paddy land, he said.

The farmers have been conserving paddy land as per the Manipur Paddy Land and Wetland Act. The ponies could be kept in some other alternative places, including the campus of NIT, Lamphel, he added.

Technical chairman of the Manipur Horse Riding and Polo Association, Ningthoukhongjam Bedajit said pony owners are keeping their horses inside the 30 acres allocated by the government. However, some local farmers have been encroaching upon the land and utilising it for their vested interest and benefits.

Pointing out that those farmers who illegally encroached upon the land sold some of the land for their own benefit, Bedajit said some stray ponies will be kept at the Marjing polo complex next Friday.

The association will seek the help of the law if an unwanted incident occurred to the ponies within the jurisdiction of the grazing field, said Bedajit. 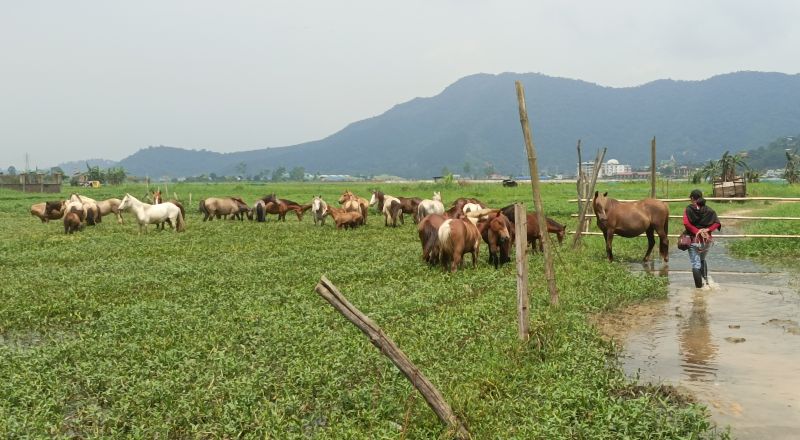 It is reported that more than 400 Manipuris ponies will be kept at the Lamphelpat grazing field.

To set up the required infrastructure for pony farms and their grazing fields, Manipur Veterinary Minister Khashim Vashum along with officials of veterinary and animal husbandry visited Marjing Pony Complex at Pangei, Imphal East and the campus of Manipur Horse Riding and Polo Association, Lamphelpat, Imphal West on June 1.

During the visit, the minister inspected the present condition of the Marjing Pony Complex at Pangei, and the Manipur Horse Riding and Polo Association. He had appealed to the people of Manipur in general and the horses and ponies owners in particular to take proper care of their animals and not to let them loose from their respective sheds or compounds to prevent any inconveniences to the public.

Further, owners who have no facilities to take proper care of their animals are requested to avail the facilities to keep their horses/ponies at ‘Marjing Pony Complex at Pangei, Imphal East, Manipur and Campus of the Manipur Horse Riding and Polo Association, Lamphelpat, Imphal West/

It may be mentioned that such letting loose of livestock animals, especially horses/ponies and colts and letting them stray on the streets is not only an offence liable to be prosecuted under the Indian Penal Code, 1973 but also under the provisions of the Cattle -Trespass Act, 1871.