Manipur Chief Minister N Biren Singh along with MP Leishemba Sanajaoba and other state ministers and officials attended the 51st Statehood Day celebration at first Manipur Rifles Parade Ground in Imphal on Saturday. Recalling the state's history and celebrating unity in diversity, Biren called upon the people to work towards integration, communal harmony, and peaceful coexistence. 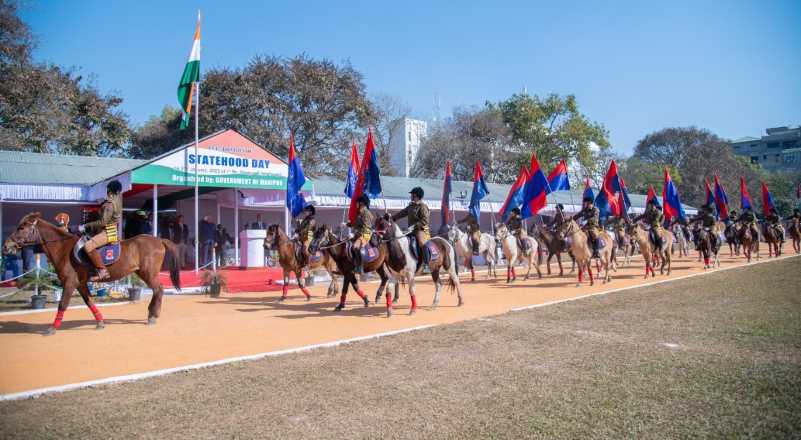 "Pleased to attend the 51st Statehood Day celebration at 1st MR Parade Ground today. On this day, let us extend appreciation to one another, celebrate our unity in diversity & recall our history and work towards integration, communal harmony, and peaceful coexistence," Chief Minister Biren mentioned in a Twitter Post.

Early in the day, the chief minister wished the people of the state on the 51st Statehood Day and urged the people to strive for the state's development.

"On the occasion of 51st Statehood Day, I take the opportunity to extend my heartiest greetings & best wishes to my dearest people. I urge the people to continue to maintain & foster peace, harmony & cooperation to strive for the best, progress & development of the state," Biren said in another tweet.

Along with Meghalaya and Tripura, Manipur became a full-fledged state of India on this day, January 21, 1972.

On the occasion, Sanajaoba, titular king of Manipur and Member of Parliament, Rajya Sabha, also wished all a "Happy Statehood Day" and called upon to take a pledge together to make Manipur a peaceful & prosperous state of India.

Earlier, on the eve of the Statehood Day on Friday, Governor La Ganesan and state ministers also extended greetings to the people of the state.

In his message to the people of Manipur, La Ganesan stated that the people of the state have been steadfastly marching towards the destined goals of all-round welfare, happiness, and satiety shoulder to shoulder with their brethren elsewhere in the country.

“This momentous occasion is significant because while we get an opportunity to reminisce about the past achievements, we also rededicate ourselves to greater efforts for the times ahead,” he stated.

Despite some vicissitudes and constraints, the state has made steady progress towards fulfillment of the identified objectives, it mentioned. Significant increases in literacy, the spread of higher education, and a host of other welfare measures have distinguished the people's efforts during the past few decades.

“On this solemn Day, let us reiterate our resolve to reach new milestones in the years ahead. Since progress in isolation cannot be imagined, this is also an appropriate occasion to express our solidarity with the rest of the country for attaining the National objectives of development through harmony, peace, and unstinted fellow feeling,” he stated.

Among several others, Manipur PWD Minister Govindas Konthoujam also extended warm greetings to people of the state: "Warm greetings to my brothers & sisters of Manipur on our Statehood Day. Blessed with vibrant culture, may we as a society continue to reach new heights of development".

On the occasion, Education Minister Th Basanta Kumar urged the younger generations to come forward and move ahead at a fast pace with a double engine of development.

“Let us pray for the constant progress of the state. Let us pay tribute to the sacrifices and efforts of each and every person who contributed to attaining the glorious goal of Statehood. I wish prosperity, happiness, and well-being to the people of Manipur,” he stated.

"I join the people of our State, Manipur in extending my warm greetings to all the people on the 51st Statehood day of Manipur. May our state progress towards the path of inclusive development under the dynamic leadership of Hon’ble CM Shri@NBirenSinghJi," she tweeted.

Joining the celebration, state Power Minister Th Biswajit Singh recalled the sacrifices and efforts of all those who contributed towards the state's progress.

"Warmest greetings to the beloved people of #Manipur on our Statehood day. Today, I recall the sacrifices & efforts of all those who contributed towards the State's progress and glorious journey. Praying for the continuous growth & prosperity of the state," Biswajit tweeted.

Water Resources Minister Awangbow Newmai said in his message: “I wish peace and prosperity to all and hope that our state continues to attain success and scale new heights of growth in the times to come. On this occasion of Statehood Day, 2023, I once again, convey my best wishes to one and all”.