The Manipur landslide death toll rose to 34 as 13 more bodies were recovered early Saturday. Rescue operation continued for the third day in search of the missing in the massive landslide that hit the Northern Frontier Railway worksite and the Indian Army company location at Marangjing near Tupul in Noney district, Manipur on June 29-30.

According to the 7.30 pm update Saturday, the rescue team recovered 13 more bodies, including eight personnel of the 107 Territorial Army (TA) and five civilians. Twenty-eight, including 7 TA personnel amd 21 civilians remained missing. The total number of people affected in the landslide is 80, official sources said.

On Friday, 18 people were rescued, while 13 bodies were recovered. Eight of the bodies were confirmed to be personnel of the 107 TA. The other five bodies were civilians, the resue team said.

So far, post-mortem has been conducted on 14 bodies. Most of them hailed from Darjeeling, West Bengal. Among the bodies of the Territorial Army, one was identified as Rifleman Tak Bahadur from Saikul in Kangpokpi district, Army sources said. 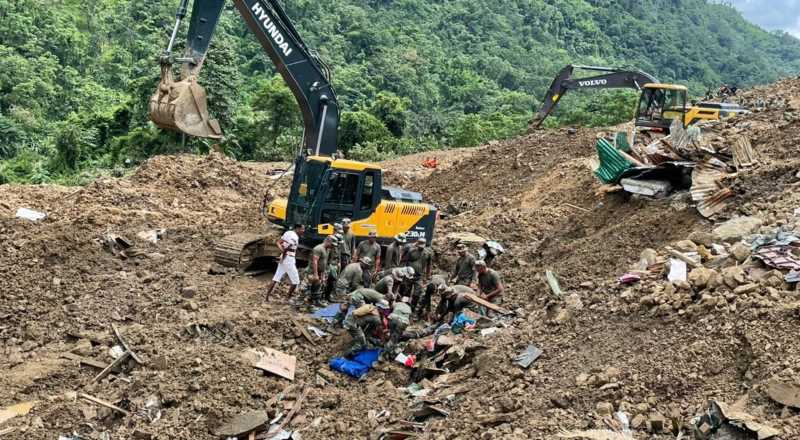 Manipur Chief Minister N Biren Singh visited the Tupul Railway Construction Camp, Noney for the second time on Friday to assess the situation. Briefing mediapersons at the incident site, Biren termed the massive landslide as one of the worst natural disasters that occurred in the state.

Meanwhile, the PRO defence wing Imphal in a statement said that the joint search and rescue operation by the Indian Army, Assam Rifles, Territorial Army, SDRF and NDRF is being continued relentlessly at the incident site in Tupul area. It stated that ‘ThroughWall Radar’ system is being used to detect any human presence inside the mud pile.

“10 columns have been pressed into the search operation. Synergised and joint operational task force is coordinating the efforts to remove mud and boulders. A Through Wall Imaging Radar is also being inducted by air to detect the presence of personnel buried in the debris. A search and rescue dog is also being inducted,” said the PRO in a statement.

The GOC in Chief Eastern Command, Lt Gen RP Kalita also visited the injured TA personnel who were initially evacuated to Liemakong Military Hospital on Thursday and are now being provided medical aid at the Assam Rifles Hospital at Mantripukhri.