The Imphal West district police in association with the Bazar Community on Sunday dispatched relief material for the state police teams, SDRF, NDRF, local people, volunteers, government officials and others involved in the search and rescue operation at Tupul, Noney, Manipur.

Relief goods have been dispatched for those affected in the landslide and all those involved in the rescue work at Tupul in Noney district, Manipur, where the landslide claimed 34 lives, left several others critically injured and 28 more people missing so far.

The Imphal West district police in association with the Bazar Community dispatched relief material to SP Noney at 8.40 am Sunday, for the state police teams, SDRF, NDRF, local people, volunteers, government officials and others involved in the search and rescue operation at Tupul.

The joint rescue operation continued for the fourth day in search of the missing persons on Sunday. The rescue operation is being carried out by personnel of the Army, Manipur Police, SDRF, NDRF and several volunteers.

So far, as many as 18 people have been rescued from the landslide debris around the incident site.

A massive landslide hit the NF Railway worksite and the Indian Army company location at Marangching, near Tupul in Noney district of Manipur on the intervening night of June 29-30. Eyewitnesses said the incident occurred around 11.30 pm on June 29. 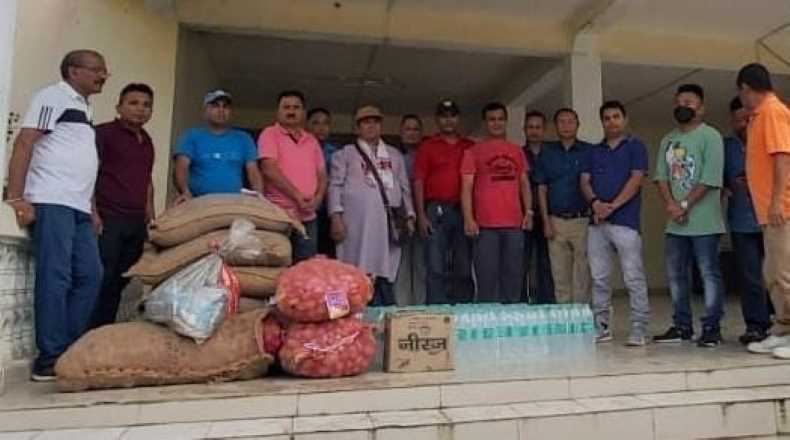 Meanwhile, a delegate of the Manipur Gorkha Welfare Union, Bharatiya Gorkha Parisangh, Manipur and All Manipur Gorkha Ex Serviceman Association visited the accident site at Tupul on Saturday. The Gorkha bodies took stock of the situation and provided relief assistances to the District Administration, Noney.

The Gorkha bodies also appreciated the rescue and evacuation works undertaken by NDRF, SDRF and other departments including local villagers who have been working day and night to rescue the victims.