"...Paid fitting tributes to our Great forefather who spearheaded the war against the Burmese invaders to liberate Manipur," Biren tweeted. 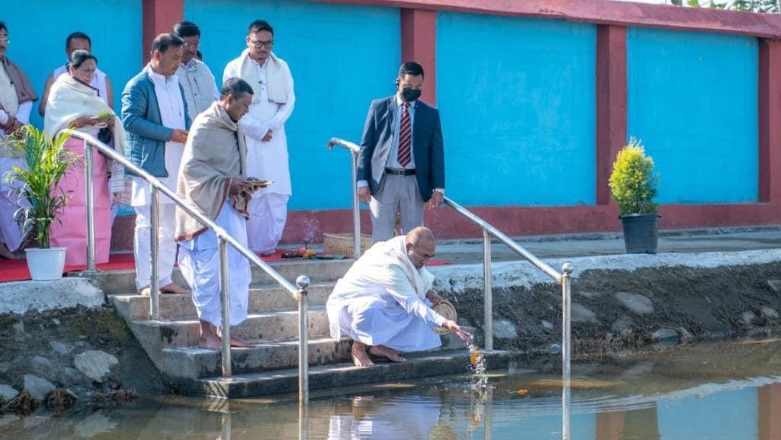 Manipur was fortunate to have two great princes during the great national liberation struggle from for the Burmese reign of terror which is known as the "Chahi Taret Khuntakpa" (The Seven Years’ Devastation (1819 -1825) in the history of Manipur. One was Maharaja Gambhir Singh (1825-1834) and the other was Maharaja Nara Singh (1844-1850). Both of them were descendants of the great King Garibniwaz.

When Maharaja Marjit Singh occupied the throne of Manipur with the help of Burmese in 1813, Chourajit Singh fled to Cachar. Gambhir Singh and his elder brother followed Maharaja Chourajit Singh to Cachar and took shelter at the court of Govind Chandra. Raja Govind Chandra appointed Gambhir Singh as the commander-in-chief of the army of Cachar kingdom. Gambhir Singh extended his support to the Cachari Raja. But he came to know the clear picture of the Raja, his unpopularity, weakness and cruelty. He waited for an opportunity.

Gambhir Singh remained a prince in search of a Kingdom. He was a determined and brave prince who had faith in his own destiny. The opportunity came in 1817, when Marjit Singh invaded Cachar on the pretext of taking revenge on Raja Govind Chandra who insulted him some years ago confiscating his beautiful pony. The real cause was the conquest of Cachar, where the Manipuri princes were taking refuge. Govind Chandra requested Chourjit Singh and Gambhir Singh for military assistance on the promise that they would be granted lands for habitation. When the invading Manipuri armies heard about this, they refused to fight and retreated. Later on, the two Manipuri princes established themselves in Cachar. Govind Chandra fled to Sylhet and sought the British help which was declined.

By June, 1823, the Burmese had more become aggressive that they re-conquered Assam. Burma had completely controlled Assam. The political condition created the north eastern frontier to a military conflict between Burma and the British. The British were in search of an ally from amongst the Manipuri princes who could help them to drive away the Burmese. They decided to take help of the more assertive Gambhir Singh in the eventual liberation of Manipur from the Burmese rule.

On 5th March, 1824, the first Anglo-Burmese war was declared and hostilities between Burma and British existed. British decided that Gambhir Singh be chosen as the ally of the British to drive away the Burmese from Manipur. On 20th April, 1824, Gambhir Singh was informed that Manipur would be given to him if he could conquer Manipur from Burmese forces. Gambhir Singh was to build up a military force of 500 Manipuri soldiers. The Levy was to be equipped, paid and disciplined by the British officers but it was under the command of Gambhir Singh himself. It was named as Raja Gambhir Singh Levy. He was given the title of Raja. Nar Singh and Gambhir Singh became the partners in the fight against Burma.

By October, 1824, all the Burmese were cleared of Cachar. They concentrated in Manipur and Kabaw Valley. The British appointed in January, 1825, Brigadier Suldham to lead the invasion of Manipur and upper Burma. On reaching Baskandi on 24th February, 1825, Suldham realized the impracticability of building the road to Manipur.

After the withdrawal of Suldham's army, Gambhir Singh proposed to liberate Manipur with his Levy of 500 soldiers. Permission was granted to the Levy to march to Manipur. Lt. RB Pemberton of the Native Light Infantry volunteered to accompany the Levy as he was interested in the survey operation to obtain precise information regarding the different passes, the resources and the strength of the Burmese forces.

Gambhir Singh and Lt. Pemberton, accompanied by Nar Singh left Sylhet on 17th May, 1825 on their march toward Manipur. They reached Baskandi and proceeded through the Western Hills of Manipur through the Akhui route. The force advanced through constant rain as it was monsoon season and suffered all sorts of hardships without the slightest complaint as they were patriotic soldiers determined to liberate their motherland. They were inspired and spirited soldiers under the inspiring leadership of Gambhir Singh. On 10th June, 1825, the Levy appeared on the western edge of Manipur Valley and they encountered the Burmese forces at Maklang, a small village, 12 miles to the west of the capital. After a hard battle with the Burmese forces stationed at the Manipur palace, Gambhir Singh gained victory and the Burmese fled.

Maharaja Gambhir Singh was a great liberator who emerged as the National Hero at the hour of the crisis in the History of Manipur. Bagyidaw (1819-1837), the defeated Burmese emperor reluctantly called him “The Ruler” of Manipur. No ruler in the history of Manipur was given such an exalted international personality of a recognised and re-conquered kingdom and its ruler, as that of Maharaja Gambhir Singh, by dint of his courage, gallantry and military expertise. His political wisdom, his gallantry and his undaunted patriotism had won for him good will of all concerned including social support of his countrymen. He was socially and politically supported by the courageous and popular Senapati Nar Singh.

In 1834 January, Kabaw Valley was handed over to the Burmese. Hearing the bad news of the impending transfer of Kabaw Valley, Maharaja Gambhir Singh died on January 9, 1834, due to heart attack.

Maharajah Gambhir Singh initially constructed his palace at Lamangdong (Bishnupur). Later, he shifted his palace to Langthaban (Canchipur). He also constructed Oinam Market near Nambol. He also constructed temples, royal residences, and magnificent gateways and dug several tanks at Langthabal. During his reign the boundary of Manipur extended upto Thibomei (presently Kohima) as evidenced by the stone inscription at Kohima which was erected by him.