Rashtriya Ekta Diwas - National Unity Day 2022: CM Biren took the pledge to foster and reinforce the state's dedication to preserve and strengthen the unity, integrity and security of the nation.

Manipur Chief Minister N Biren Singh on the occasion of Rashtriya Ekta Diwas - National Unity Day 2022, took the pledge to foster and reinforce the state's dedication to preserve and strengthen the unity, integrity and security of the nation.

"Took the pledge on Rashtriya Ekta Diwas (National Unity Day) to foster and reinforce our dedication to preserve and strengthen the unity, integrity and security of our nation," Biren tweeted.

Speaking at the occasion that commemorates the 147th Birth Anniversary of Sardar Vallabh Bhai Patel, Biren said the National Unity Day Parade is a mark of our commitment and dedication towards the nation’s unity and integrity.

"Attended the observation of Rashtriya Ekta Diwas at 1st Bn MR Parade Ground, Imphal West today. The National Unity Day Parade is a mark of our commitment and dedication towards the nation’s unity and integrity which was envisioned by Sardar Patel Ji, the Iron Man of India," the chief minister also said in a tweet on Monday.

Early in the day, Biren recalled Sardar Patel's contributions towards bringing the country together and called upon all to reaffirm commitment to preserve the unity and integrity of India.

Meanwhile, the National Unity Day was observed at different parts of the state.

The 143 Bn, CRPF, deployed in Lamphelpat, Imphal West celebrated the birth Anniversary of Sardar Vallabhbhai Patel as National Unity Day (Rashtriya Ekta Diwas) with various programme since last Friday to Monday. On Monday's celebration, a Unity Run was organised from BN HQR Lamphelpat to Langol led by Commadant of 143 Bn Lamkhokham Lhoujem. The programme concluded with a march past by contingent of 143 Bn, CRPF said in a release.

The IGAR (South) and other battalions of Assam Rifles across the state on Monday celebrated the National Unity Day. In IGAR (South) Mantripukhri Garrison, a Unity Pledge bike rally and Run for Unity for the troops, families and children of AR was organised as a part of the celebration, said IGAR (South) in a release. 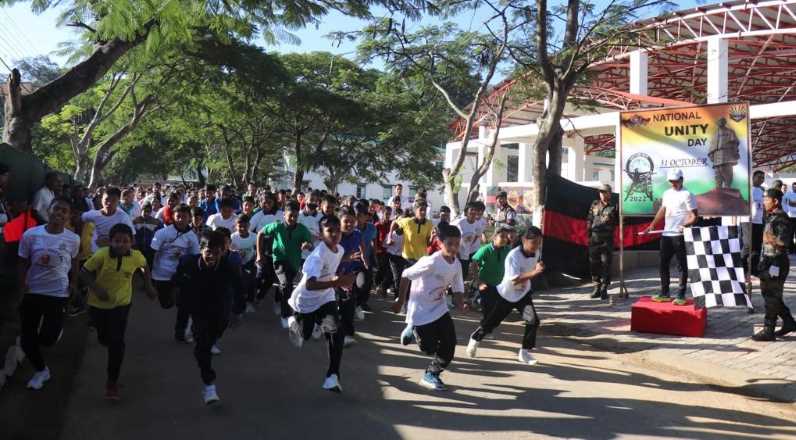 The events witnessed enthusiastic participation of 500 children, families and troops, the release said, adding that it was conducted in the presence of Lt Gen PC Nair and Maj Gen Rajan Sharawa.

Sardar Patel, who is also known as “Loh purush” (Iron Man) of India, not only contributed immensely in the independence struggle but also played a major role in unification of the nation, the release mentioned. 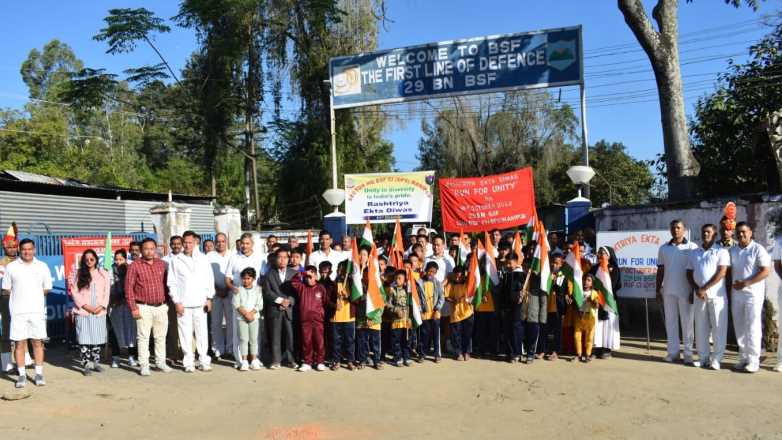 The BSF said in a release that as a part of the observance a cleanliness drive was carried out at BSF Koirengei campus besides flagged off a cycle rally by DIG SHQ CI (Ops) Manipur Dinesh Singh Rawat  in which Comdt of 29 Bn BSF Sonam Chhering along with troops of SHQ BSF and 29 Bn BSF attended.

The 44 Assam Rifles under the aegis of 22 Sector/ IGAR (East) on Monday organised the “Rashtriya Ekta Diwas” by conducting an oath ceremony followed by a parade in Tamenglong town and a Unity Run at Azuram village. 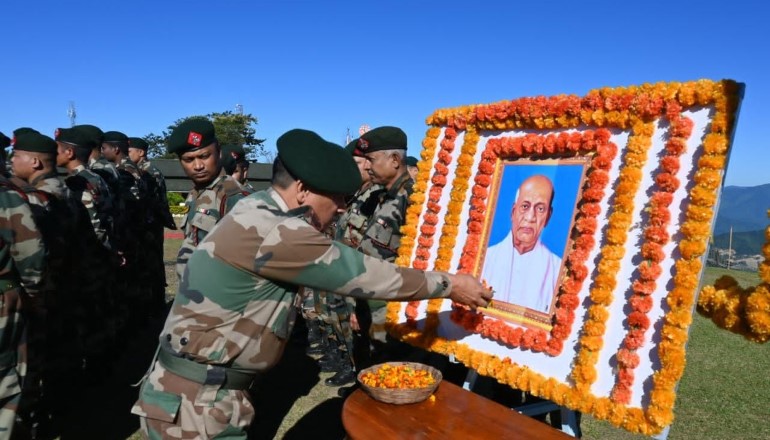 The event started from unit headquarters in Tamenglong town where rich floral tributes were paid to the Iron Man of India by the Commandant.

The participants of the march past, spreading the message of unity, peace and prosperity through community participation, traversed through the main market of the town. A Run for Unity was also organised for the youth at Azuram unit.

Approximately, 45 students, including 20 girls, took part in the run, which was followed by the pledge taking ceremony. 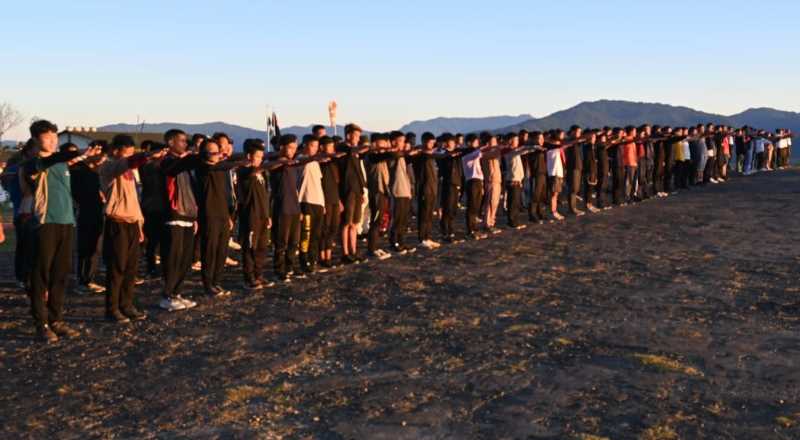 Sardar Vallabhbhai Patel played a crucial role in India's freedom movement and in integration of 560 princely states. He was the first deputy prime minister of independent India. Since 2014, the National Unity Day or Rashtriya Ekta Diwas has been celebrated on 31 October every year to mark his birth anniversary.  The nation observed the 147th anniversary of the Iron Man of India. 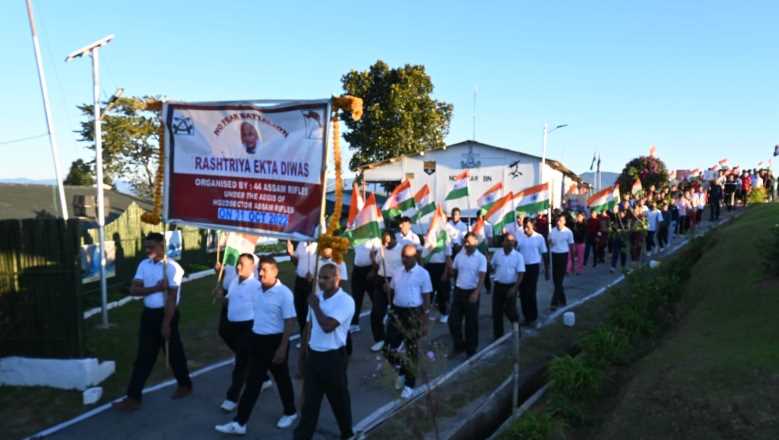 The Home Ministry, in an official statement for National Unity Day, said, "The day will provide an opportunity to re-affirm the inherent strength and resilience of our nation to withstand the actual and potential threats to the unity, integrity and security of our country."

The Somsai battalion under the aegis of 10 sector Assam Rifles celebrated National Unity Day in Ukhrul Headquarters on Monday. As a part of the celebration, a 6 km unity run, bike rally, march past and oath taking ceremony was organised with full vigour and enthusiasm. 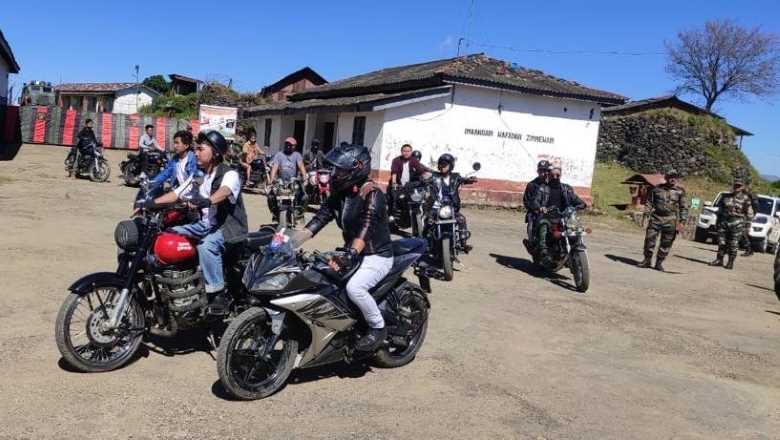 The Unity Run from Ukhrul town to Somsai was flagged off by Colonel Manoj Shinde, Commandant 35 Assam Rifles. As many as 150 participants took part in the event followed by a march past organised for the students of ARPS, Somsai.

As part of the event, a bike rally from Ukhrul to Jorcheng was flagged off by Brigadier Vaibhav Shinde, DIG 10 Sector Assam Rifles. Twenty bikers from ‘The Soul Brothers", an Ukhrul district-based bikers club extended their fullest support in spreading the message of unity. At the culmination of  the events, an oath ceremony was also undertaken to pledge for Unity.

A press release by 109 Bn CRPF stated that in celebration of the occasion, the 109 Bn CRPF organised ‘Run for Unity and Unity Chain’ which was flagged off from 109 Bn CRPF headquarter at Mongsangei by the unit commandant Bal Krishna Ram, second-in-command Sandeep and  deputy commandant Kiyam Rajiv Singh along with other  officials and personnel of 109 Bn, it added. The 109 Bn CRPF also organised ‘Cycle Rally’ on Saturday and ‘Bike Rally' on Sunday it mentioned.