A one-day workshop on ‘Redefining Loktak Indigenous People’s Territory, Rights to Life and Resource Use’’ was held at Manipur University VC’s court hall on Monday.

The fishing community and villagers depending on the Loktak Lake have raised serious concerns that the age-old bond between lake and indigenous people will be broken due to the Loktak Protection Act, 2006.

In this regard, a one-day workshop on ‘Redefining Loktak Indigenous Peoples’ Territory, Rights to Life and Resource Use’’ was held at Manipur University VC’s court hall on Monday. Attending the workshop, villagers of Loktak lake expressed that their lives have been constantly affected by the Loktak Protection Act, 2006 which is said to be controversial. 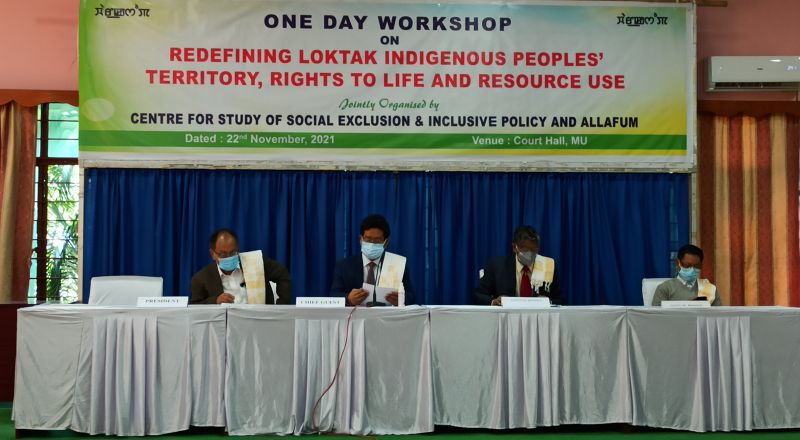 The workshop was organised by the Centre for Study of Social Exclusion and Inclusive Policy, Manipur University in association with the All Loktak Lake Areas Fishermen’s Union, Manipur (ALLAFUM).

The workshop highlighted that the United Nations (UN) have specifically put emphasis on the participatory involvement of Indigenous peoples and local communities (IPLCs) in every aspect of development, with particular focus on the restoration and conservation of natural ecosystems that are intrinsically connected with the lives of IPLCs who thrive within natural landscapes like forests, wetlands and coastlines.

It deliberated on the UN Declaration on the Rights of Indigenous Peoples which emphatically stresses on protection of the fundamental rights of IPLCs and respect of their rights to life and resource use.

In this setting, the fishing community of Loktak Lake of Manipur, as is true of other wetland communities of Pumlen, Khoidum Lamjao, etc. have asserted their rights to their ‘territories of life’ upon which they thrive for their living and sustenance.

The fishing community of the Loktak Lake expressed that they have been deprived of their livelihood over the years and they remain as a marginalised group in the society.

The interactive session sought to re-emphasize the need for the state to review the status of Loktak in the context of the emerging global definition of ‘Territory of Life’.

During the workshop, member, ICCA Consortium Salam Rajesh spoke on Loktak fishers’ assertion on their rights to life and resource use within Loktak as a ‘Territory of Life’.