In an attempt to bring peace in Singjamei assembly constituency, residents took out a peace rally under the banner ‘Singjamei against Violence’ on Friday.

Strongly condemning poll-related violence that took place during the Manipur Assembly elections 2022 and in an attempt to bring peace in Singjamei assembly constituency, residents took out a peace rally under the banner ‘Singjamei against Violence’ on Friday.

The rally which was carried out in Singjamei constituency began from Singjamei parking and passed through National Highway-2 towards Yumnam Leikai traffic point and culminated at Ibudhou Luwangpokpa Model Club Ground. 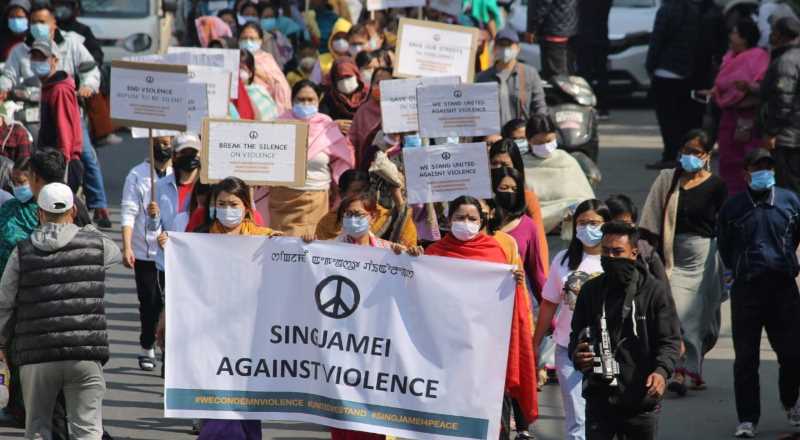 One of the protesters, Laishram ongbi Bimola Devi said frequent poll-related violence took place in Singjamei assembly constituency ahead of the Phase-I election and on the poll day on February 28.

Several people in the constituency received frequent threats from some workers of political parties, she alleged, adding that the rally was carried out to prevent such unlawful incidents in the near future.

Another protester, Laishram Kabita alleged that workers of BJP candidate Yumnam Khemchand assaulted some of the workers of rival candidates even on the day of first phase polling conducted on February 28.

Workers of BJP candidate physically assaulted one of the women at 13/9 polling station of Singjamei assembly constituency, she alleged, appealing to the people not to encourage such poll violence as it will increase enmity among the people.

During the rally, protester held placards with slogans written on them such as ‘break the silence on violence’, ‘we stand united against violence’ and others.