Hundreds take out torch rally against drugs menace in Imphal

AMUCO president Ph Nando Luwang expressed strong opposition to the government's plan to legalise sale of alcohol in the state.

Meira paibis along with hundreds of people under the banner Poirei Leimarol, AMAWOVA, AMUCO and MSF took out a torch rally against the menace of drugs and alcoholism in the Manipuri society in Imphal on Sunday.

The participants began the rally from Liwa Lambi, Singjamei in Imphal West and headed towards Hicham Yaicham Pat in Yaiskul.

However, police personnel intercepted them at Chinga crossing and the rally was diverted towards Pishumthong. Later, they headed towards Heirangoithong and culminated at the starting point.

Meanwhile, speaking to the media on the sidelines of the protest, AMUCO president Ph Nando Luwang said that the rally was taken out to spread awareness to save the Manipuri society from drug menace and alcoholism.

Raising concern that the society is sinking in drugs and alcoholism, he further expressed strong opposition to the government's plan to legalise sale and consumption of alcohol in the state.

Poirei Leimarol president Longjam Memchoubi sought support and cooperation of the people in completely rooting out the drug menace in the state.

She also emphasised the importance of elders of families and localities in the fight against drugs and alcohol.

Similar rallies will be taken out in various localities across the state, the rally organisers said.

Meanwhile, in the effort to spread awareness, a public meeting on ‘Nishana Khunnaida Piba Cheitheng Amasung Nupi Angangsingda Chathaba Meewot Meenei Masibu Thingbada Meeyamgi Thoudang’ (The effect of drugs on society, and the role of public in stopping its ill effects on women and children) was organised by Coalition Against Drugs and Alcohol (CADA) at Khurai Konsam Leikai, Imphal East on Saturday. 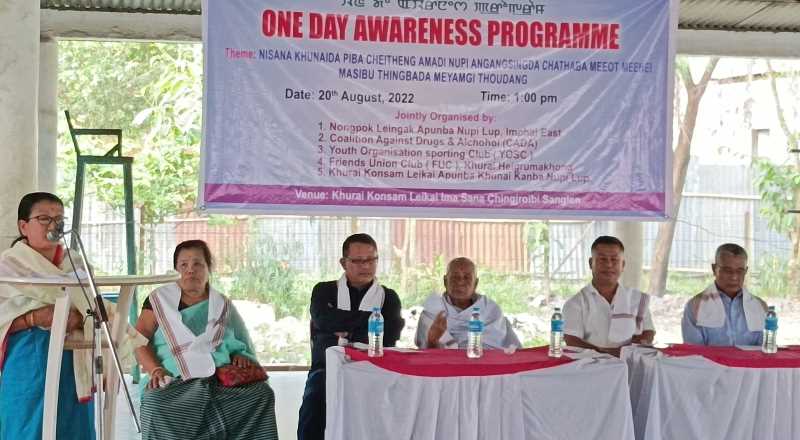 CADA stated in a release that it had organised a public meeting on the theme as a part of the organisation’s drive against drug abuse at Ima Chingjraoibi Sanglen at Khurai Konsam Leikai, Imphal East.

The resource person of the meeting Apunba Manipur Kanba Ima Lup (AMKIL) advisor Khangembam Anandi stressed on the various crimes which are incited by the intoxicated minds of drunks.

Recalling unfortunate events caused by the consumption of alcohol, she condemned the normalization of alcohol consumption in the society especially during rituals and ceremonies. She urged the authorities concerned to take up necessary actions immediately, it also added.

Anandi also said that the rise in unemployment and corruption despite the rise in the number of educated youths is also one of the biggest factors of the rise in drug abuse, it read. She demanded for the implementation of respective law to grant capital punishment for those involved in drug trades, it informed.

The release further stated that speaking on the occasion, Nongpok Leingak Apunba Nupi Lup president Yumlembam Mema condemned the normalisation of alcohol consumption in the society, and recalled an incident of a group of boys and girls in a parked car, as they were too drunk to drive. “She added that, when the parents of the girls were called, the parents nonchalantly replied that their daughter drinks regularly,” it read.

Mema also mentioned she had pledged to donate her body and her organs to RIMS for the research and study purposes, it added.