Frequent breakdown of old Irang Bridge in Tamenglong district of Manipur connecting the road from Tamenglong to Imphal and Jiribam on National Highway-37 has been causing immense hardship for the people in the region. What troubles the public more is the delay or slow progress in fixing the bridge or lack of prior information of the repair work being conducted that often leaves transporters and travelers stranded on the road, on both sides of Irang river.

Irang bridge over Irang River is located at Irang (Taobam) village in Tamenglong district at a distance of 46.5 km from Tamenglong town / headquarters.

On Saturday, several transporters and the travelling public in Tamenglong faced inconveniences as they had to either suspend or postpone their journey to Imphal and Jiribam owing to the breakdown of the Irang Bridge and the repair work that was being carried out without giving prior information to the public.

Expressing concern, Ramkung, a senior journalist in Tamenglong said, "This information needs to be shared beforehand so that travellers and transport operators could plan accordingly. Timely intervention of the concerned authority is sought". 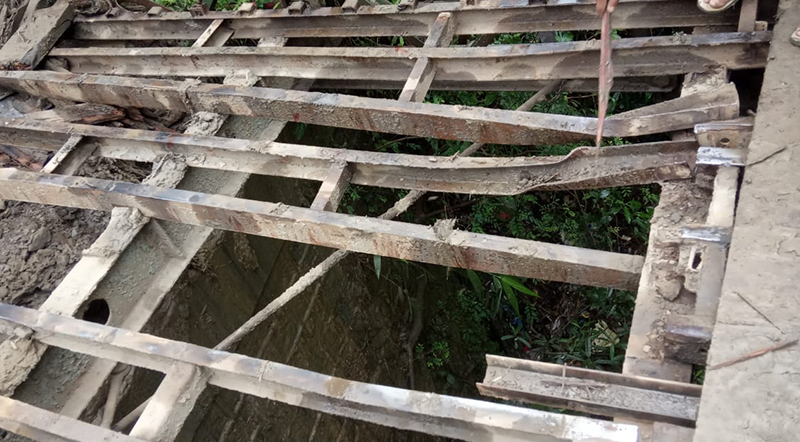 Often, when the bridge is damaged, the delay in the repair and restoration work would cut off parts of Tamenglong district from the rest of the world, causing untold hardship for the people living in the hilly and rough terrain of Manipur west district. At times, a couple of villagers can be seen attempting to fix the bridge.

It may be pointed that HVS Construction Material Pvt Ltd, Imphal under National Highways and Infrastructure Development Corporation Ltd (NHIDCL) is undertaking the contract work for repairing the highway which parts remain poorly paved and is often hit by frequent and heavy landslides during rainy months.

A vexed passenger bus driver told Imphal Free Press that any sort of repair or construction works conducted by the BRTF did not hamper the movement of traffic along the highway. Any disturbances along the highway is often widely circulated. Moreover, BRTF usually worked at night to avoid unnecessary traffic during day time, he added.

On the contrary, HVS Constructions is delaying in taking up any repairing work, including Irang Bridge at Irang (Taobam) village which breaks down frequently, he said.

“Although the security force is guarding the bridge, they never come to check and help the drivers or the workers repairing the road,” he lamented and appealed to the authority concerned to look into the grievances of travelers and take action against the negligence of the contractors.

Meanwhile, a concerned local, under the condition of animosity, said that during the COVID-19 pandemic, stranded travelers have to get down for buying edibles and water by exposing themselves to the people in and around the village.

Pointing out that frequent damage and repairing of Irang Bridge is due to the bending of runner iron bars, the man said, “When the iron bar bends, the wooden planks start to break into pieces and eventually, the contractor has to be called to come from Imphal”.

After waiting for many hours at Irang village, the road was opened again around 2 pm on Saturday. However, the damaged condition of the bridge poses threat to the life of the public using the road.

It may be recalled that In 2019, the state government had announced that NHIDCL would construct the new Irang Bridge, which would be of four lanes, at the cost of Rs 30.75 crore which would be funded by the Road Transport and Highways (MoRTH) Ministry. It had stated 650 days’ target for the completion of the bridge over Irang River, at a distance of 34 km away from Noney market area. On January 8, 2019, the Direct Purchase Committee headed by the Noney DC was set up to assess the construction of the bridge, according to reports.

Apart from the old and broken Irang Bridge, the people also suffer heavy and frequent landslides on the highway during rainy months. It may be pointed out that Tamenglong is a rainforest region which receives heavy rainfall during monsoon and almost throughout the year, leading to heavy landslides not only on the highway but also in some residential areas in the town and villages in the region.

In the past, there have been several instances of lives lost while traveling on deplorable roads. Recently, the Imphal Free Press reported the news of an expectant woman being carried on a makeshift bamboo stretcher to a health centre in the absence of any motorable road. The age-old issue of road and connectivity in Tamenglong and other hilly districts of Manipur remains to be fully addressed by the authorities concerned and those in power.