Farmers' representatives from all the districts of Manipur, gathered at Diocesan Social Service Society (DSSS), Mantripukhri, Manipur and deliberated on the issues and challenges faced by the farmers of Manipur in a consultation meeting.

Farmers of Manipur are still facing challenges and issues in different stages of cultivation, harvesting and farming, and the government should look after the policies, plan, projects, schemes which have been launched for agriculture, said farmers’ representatives on Saturday.

Farmers' representatives from all the districts of Manipur, gathered at Diocesan Social Service Society (DSSS), Mantripukhri, Manipur and deliberated on the issues and challenges faced by the farmers of Manipur in a consultation meeting. The meeting was jointly organised by the Human Rights Law Network (HRLN), the Human Rights Alert (HRA) and the Lounmi Sinmi Apun Lup (LOUSAL).

The farmers' representatives shared their experiences, issues and challenges and resolved to take several steps. 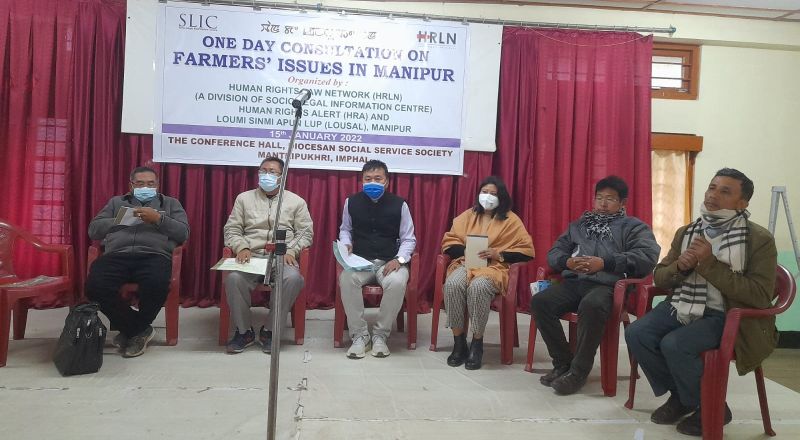 It was resolved that a holistic agricultural policy for the state of Manipur should be formulated through an inclusive process.

The need to establish a strong farmers’ union for the whole of Manipur to highlight their issues were raised.

It was pointed out that the Public Distribution System suffered from various limitations in providing food security of the people. Vested interest individuals and groups gain out of the system rather than the beneficiaries.

The farmers stated that the state should buy the agricultural and horticultural products of the farmers by ensuring a Minimum Procurement Price. It was also resolved that the locally produced rice should be procured from the local farmers at an assured minimum procurement price and distributed through the existing Targeted Public Distribution System.

Distribution of seeds and bio fertilizers should be done equitably and transparently, the farmers stated.

The farmers expressed that irrigation system should be improved and special attention should be given to the specific needs of the hill areas to harvest rainwater. Multiple and diverse cropping should be encouraged. Liberal credit facilities should be provided to small and marginalized farmers, and concerted efforts should be made to assure stable market of the agricultural and horticultural products, the farmers resolved.

The recent success of the farmers’ movement and the present challenges faced by them in India was presented by Kirankumar Vissa of the Alliance for Sustainable and Holistic Agriculture (ASHA) from Andhra Pradesh through video conference.

Similarly, Mirnal Gohain of Action Aid, Assam spoke on ‘Food Sovereignty and Sustainable Agriculture in North East’ highlighting the internal colonialism suffered by the Northeast in the Agriculture sector in the last seven decades.

Environmental activist Wangkheirakpam Ramananda spoke on the ‘Developmental Justice and Palm Oil Plantation’, citing the experience of Mizoram and other countries of South East Asia.