Churachandpur police seized 25 soap cases containing suspected heroin powder from the possession of a man who was arrested at Selshi village in Sangaikot of Churachandpur district.

According to a police source, around 5:10 pm on Saturday Nb Sub DS Dutta of 36 Assam Rrifles lodged a written report to the OC, Churachandpur Police Staton, stating that earlier in the morning at 6 am, they received information on movement of drug peddlers at Selshi village, Sangaikot.

On receipt of the information, an AR team under Major SK Das established MVCP at village Selshi and during the operation, they detained an individual and detected 25 soap cases containing suspected heroin powder along with a white plastic container.

The drug peddler was identified as Mangliansiam Phiamphu (22), son of Chinsuankap of Suangphu village under Singhat Sub Division. Besides the heroin powder, the AR also recovered one small axe and Rs 1,720 cash only in the presence of independent witnesses under a seizure Memo for his unauthorised possession, the police source said.

The accused, along with the seized items, were handed over to the OC CCP Police Station.

In regards to the case, the police registered a regular case under FIR No 69(05)2022 CCP PS U/S 21 (c) 29 NDPS Act against the accused person and his associates for investigation. 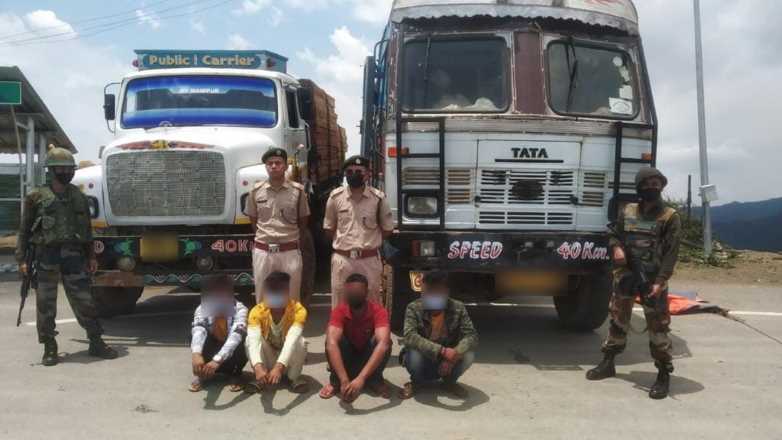 In another operation, troops of Assam Rifles intercepted two trucks carrying illegal timber at Kulyang village, Tengnoupal, it further stated. The seized timber was assessed to be worth Rs 2.60 crore, it added. The seized contraband and the apprehended traffickers were handed over to Churachandpur Police and Forest department, Tengnoupal for further investigation, it added.