Students and staff of Little Flower School, Imphal condemned the bomb attack on the school and demanded the government to ensure safety of young students.

Condemning the June 5 IED blast at the Little Flower School in Imphal, students and faculties of the school conducted a protest demonstration in front of the school on Monday. They demanded a violence free education zone.

The protesters held placards with slogans which reads, "Stop violence," "Allow us to grow without fear," "we condemned bomb attack at our school," "we are the pillars of future," among others. 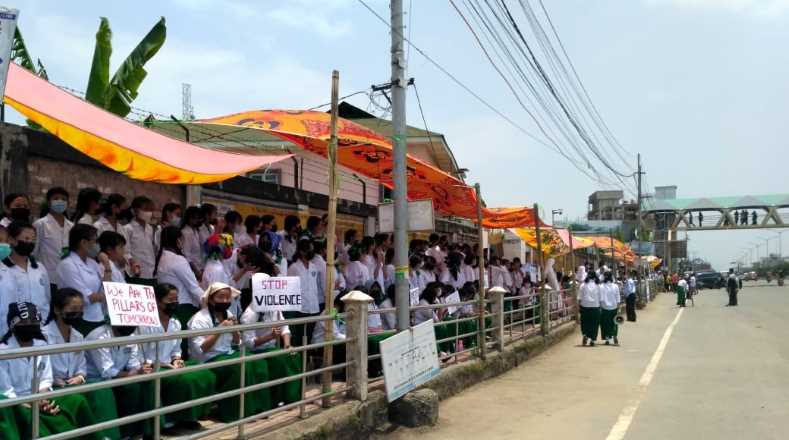 Miscrenats exploded an IED at the Little Flower School gate No 2 at around 3.15 am Sunday. There was no report of any casuality. However a portion of the gate was damaged due to the impact of the blast.

"We don't deserve such kind of terrifying atrocity in our school," an eight standard student of the school Khomdram Sushanti told the media while expressing her strong condemnation agaisnt the blast to the media.

Education zone must be free from all kind of crimes, she said, urging the law enforcing agencies of the government to initiate proactive actions against the perpetrator(s).

Is is unfortunate that such atrocity is happening in a school which is working for the growth and all round development of girl students, said head mistress of the school Kaini Martha.

Apeealing to stop such violence culture in educational institutions, she appealed to the state authority to provide due security and surveillance to the school for the best interest and safety of the students.

The All Manipur Catholic Union (AMCU) on Sunday expressed strong condemnations against the group that had planned the blast at Little Flower School in Imphal East, and appealed to the state to take proactive actions so that the people who are responsible for these violent acts are brought to justice.

In a release issued by its information and publicity secretary James Gangmei, AMCU urged to provide due security and surveillance to all the institutions that have been subjected to such violence. If education institutions are not safe, the very foundation of the society is at threat,” it stated.

Such acts of violence not only threatens the school fraternity but also harms the academic atmosphere of Little Flower School which has been a leading example of modern and secular education, it mentioned.

Educational institutions need a conducive environment for the positive expansion of the human mind, it stated. The use of such violence is against the spirit of a democratic society, it further stated, adding “as a democratic society, we should settle our issues through dialogue and arbitration.”

It further stated that the use of intimidation, threat and force cannot bring about peaceful settlement to any issues. Such acts can only create an atmosphere of fear and apprehension, it added. The blast has created a sense of fear and insecurity among the general public, it added.

Must Read: Is private tuition solution to quality education?

Must Read: Tuition not option for Manipuri girl to top Nagaland board exam