The BJP office in Bishnupur and Thoubal were also inaugurated on Sunday.

“It is a rejoiceful and auspicious day for very Karyakatas in Manipur as Hon’ble BJP National President BJP, Shri @JPNadda Ji inaugurated the BJP State Office today. This day also marks a historic day for the party as Nadda Ji gave a new name to this office as Thambal Shanglen,” Manipur Chief Minister N Biren Singh said in a Twitter post.

Speaking on the occassion, Nadda said with the increase of BJP legislatures in Manipur after every five years, it clearly shows that the party is gaining the public support, faith and trust. He said the days of destruction in Manipur are gone since the inception of BJP-led government in the state. 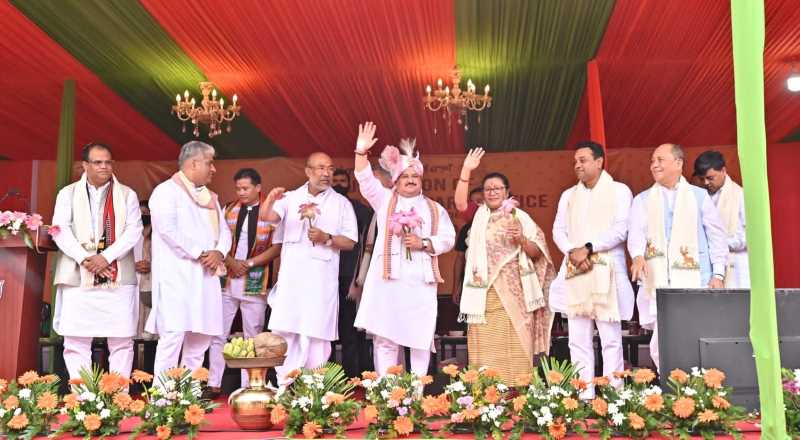 Now the state has become a gateway of development, he said, adding that what the people are witnessing is just the initial stage of development. The BJP is firmly dedicated to move far forward towards development, Nadda said.

Lauding former Union Minister Th Chaoba for his initiatives in uplifting the party in Manipur from the ground level, the president thanked him and other party workers for safeguarding a large portion of land for the BJP in the heart of Imphal city for the construction of its office.

Pointing out that the new office building has all the modern facilities such as research wing, he said research work is must needed to know the various contribution of the leaders and to plan for various initiatives to be taken up in the future.

Asking the BJP workers of Manipur to make sure that all the citizens are fully vaccinated to prevent from the Covid virus, Nadda said, "It is our responsible to take various initiatives for the welfare of the general public."
Chief Minister N Biren also spoke on the occasion and higlighted the various welfare programme taken up by the BJP government for the welfare of the public, especially the underprivileged groups.
Witnessing many thanksgiving speech or message uploaded on social media by the common people is proof that the BJP addresses all the genuine grievances of the public, he said.
"Addressing the grievances of the public is the prior duty of the BJP," he said, mentioning the Go to Village and Go to Hills missions, which is especially introduced to address public grievances and give doorstep delivery of various Central and state sponsor schemes.
The chief minister also announced that the state government has completed a survey for construction of a 25-km elevated highway in Manipur and he sent the report to the Centre for approval. Once the Centre gave green signal for the project, the foundation stone will be laid soon, he added.
Biren also pointed out that Manipur has recently produced six UPSC and 15 SSB successful candidates, six women and five men players in the national football team.
If there is more coordination among the people of Manipur, the state can easily become a model state, he said, adding, "Let us all join hands and work together at the best level for the welfare of the public to get absolute majority in the upcoming Assembly election."
Culture programme were also performed by different indigenous groups of Manipur during the function.
The function was also attended by Manipur BJP president A Sharda, Union Minister Bhupender Yadav, Union Minister of State RK Ranjan, Manipur BJP in-charge Sambit Patra, national and state BJP leaders, including ministers and MLAs.
Nadda arrived in Imphal on Saturday to a warm welcome by state party leaders, including Chief Minister N Biren. The BJP national president is on a visit to the state in view of the state Assembly election due early next year.
Advertisement