Commemorating the contribution made by the patriotic leader Arambam Samarendra for the betterment of Manipur society during his lifetime, the Social Standard Club (SSC) organised a programme at the memorial complex. The Patriotic Writers Forum Manipur also observed the death anniversary at Manipur Press Club.

Great tributes were paid to Arambam Samarendra during the observation of his 22nd death anniversary by the people of Manipur at his memorial complex, Khurai Nandeibam Leikai, Imphal on Friday. Prayers and floral tributes, presentation of songs and recitation of poems written by him mark the event.

Commemorating the contribution made by patriotic leader Arambam Samarendra for the betterment of Manipur society during his lifetime, the Social Standard Club (SSC) organised a programme at the memorial complex.

The programme began with a two-minutes silence observation. It was followed by singing of a patriotic song Chaikhre Ngasi. The song was written by Samarendra.

Addressing the function as chief guest, Pradhan of Khurai Nandeibam Leikai, Yumnam Chitra Devi said that Arambam Samarendra continues to live in the hearts and minds of people, and his selfless sacrifices for the state are remembered. How Arambam Samarendra led the state in the right direction is commendable, she said.

She recalled the incident where Arambam Samarendra was shot dead on this day while addressing a function.

“It is just like yesterday when the whole state mourned when he was martyred. The kind of literary work he did, be it in the poem, drama, patriotic songs etc. during his lifetime conveys a lot of strong messages. As with the help of all these artistic works, we cannot forget him till date,” she stated.

She appealed to the youths of the state to review, read and listen to the poems and songs written by Arambam Samarendra to revive the feeling of patriotism.

Advisor of SSC, Salam Samungou said that Samarendra was a multi-faceted person with a strong desire to promote equality in the state.

Attending the function as chief guest, chairman of Film Forum Manipur, Laimayum Surjakanta Sharma said that the death of Samarendra was a great loss for the state. His profound love for his motherland is praiseworthy and as a visionary artist, he had already expressed the issues and problems that are presently crippling in the state.

The contributions made by him even in the film industry extending good advice and suggestions are unforgettable, Sharma said. He also said that his multi-faceted character, straight forward nature and patience defined who he was.

In the morning PAWF conducted a floral tribute ceremony to Arambam Samarendra at Nungshikol Park, Chana. 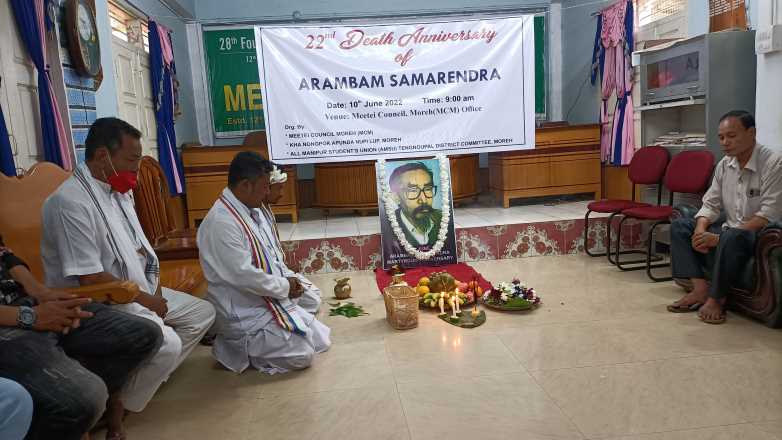 Meanwhile, our Moreh correspondent added that the 22nd death anniversary of Arambam Samarendra was observed at the border town, Moreh on Friday.

On the sidelines of the event, MCM president M Thoiba said that Arambam Samarendra was a renowned artist, pioneer, writer and a social activist. He worked for the welfare of the society, peace and communal harmony of the state. “Therefore, every right thinking person should pay respect and honour the martyr,” he added.