The All College Tribal Students’ Union Imphal failed to demonstrate a protest on Saturday in Imphal as they were dispersed by Manipur Police with tear gas shells, during which as many as 30 protesters and three police personnel sustained injuries in a confrontation which ensued. 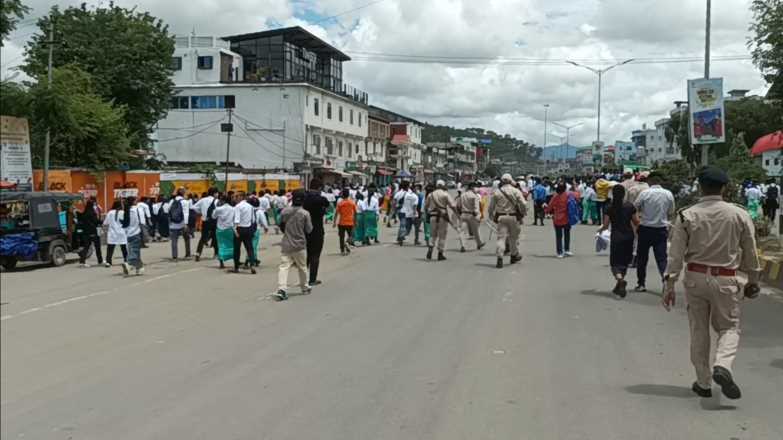 The notification also mentioned that executive members of the Tribal Students Union who fail to turn up will be fined a sum of Rs 1,000. The reporting time and venue mentioned in the notification was at 10 am on Saturday at Adimjati BasketBall court.

Imphal West DC had also issued an order to impose CrPC 144 in the entire area of Imphal West district with effect from 6.30 pm on Thursday.

At around 9.30 am, protesters started gathering at Mao-Imphal Market, Kabow Leikai near MBC church which is located around 100 metres south of Adimjati, Imphal.

On the sideline of the gathering, Social and Cultural secretary of Tribal Students’ Union, DM colleges of Arts Ningjam Jajo told the media that whenever issues of Tribal communities come up in Manipur, the state government would arrest the tribal leaders.

India is a land of democracy and every citizen has the right to express their thoughts and expressions, he said.  On Friday, more than hundreds of protesters came and locked down the head office of ATSUM located at Adimjati while DC, Imphal West has already imposed CrpC 144 in the entire district, he said.

Tribal students will continue their protests until the arrested ATSUM leaders are released, he further said, warning that the state government should bear the consequences.

During the clash, at least 30 protesters sustained injuries as the police resorted to lathi charge. Around 3 police personnel also received minor injuries. Police detained at least three protesters who were later set free.

Meanwhile, one of the leaders of a tribal students’ body in social media mentioned that the locking of head office of ATSUM by Meitei Leepun will be taken as a direct challenge to the tribal communities of Manipur. The demands of tribal students are not to accuse any community of Manipur but to demand constitutional rights.

In a video clip, it is further alleged that “the locking of ATSUM head office was conducted in conspiracy with the state government.”