Travelling in Tamenglong remains not only difficult but also risky owing to the rough terrain made worse by the weather condition, while the road development works move at a snail's pace.

As heavy rains continue to lash the blue-green hills of Manipur’s Tamenglong district even as Autumn sets in, a landslide near Sinam village blocked a portion of Imphal-Tamenglong road on Thursday. Those who witnessed it alerted others in social media to avoid using the road for the day to prevent any untoward incidents. Travelling in Tamenglong remains not only difficult but also risky owing to the rough terrain made worse by the weather condition, while the road development works move at a snail's pace.

In fact, the roads in Tamenglong are considered most dangerous in Manipur. The roads connecting villages and the town and Tamenglong to Imphal are not only in appalling condition, but also pose danger to the lives of those traveling and commuting. Besides the impact of inclement weather, the road condition is worsened by the incomplete road widening work launched as a part of development projects in the region.

Those responsible for the road development and those engaged in the work have not been able to fix the poor road conditions in this hilly district. But how long must the people suffer due to the deprivation of good all-seasonal roads, which is a basic infrastructural need of the people? 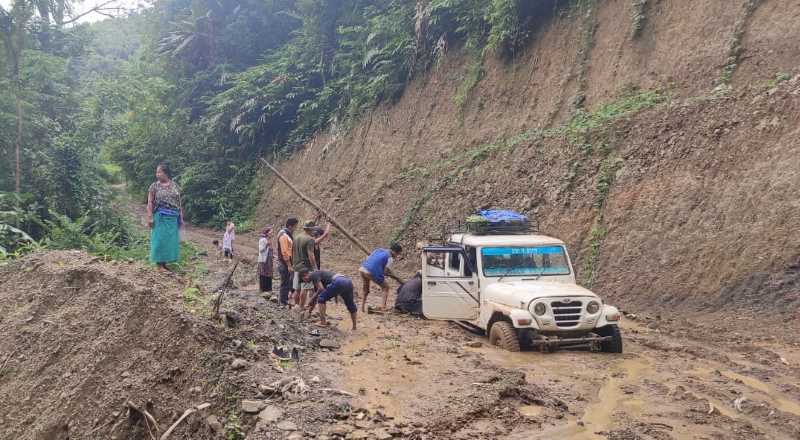 Apart from the poor inter-villages and town roads, the prolonged road expansion work cutting through the town is causing intolerable inconveniences and health hazards to the people. The under-construction road is becoming life-threatening not only for the commuters but also to those people living near the roadside.

Also, as a part of the development works, the office of the deputy commissioner Tamenglong was shifted from the old office building to the mini secretariat, Farmland, in march 2021. But, it appears the condition of the road to the office was not taken into account when shifting.

Recently, the office of the district deputy commissioner was shifted back to the old building in Tamenglong Headquarters, as office-goers were facing immense difficulty in commuting to the new office building due to the deplorable road leading to it.

It's already September, but rainfall continues incessantly in this rainforest region. Everytime it rains, rain water runs along the main market road in the middle of the town, the road condition here too has deteriorated, making it extremely difficult for market-goers and other daily commuters.

Now, all roads to Tousem sub-Division reportedly remained cut off due to mudslides caused by heavy rainfall. All major connecting roads from Kaiphundai to Tousem area and Tamenglong to Tousem sub-division are in deplorable condition. 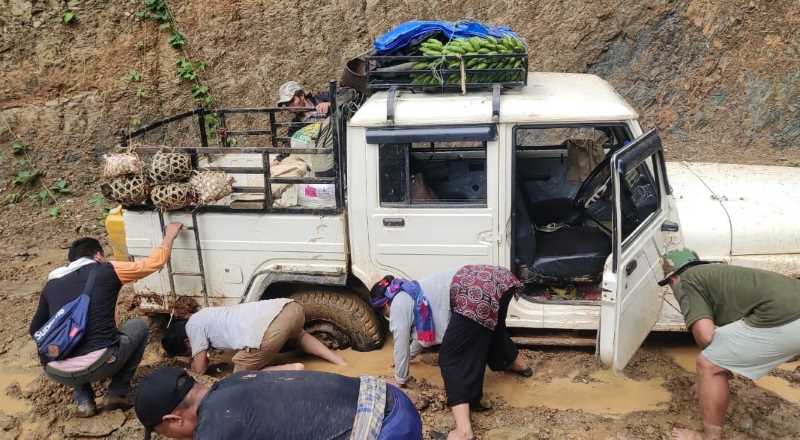 Passengers travelling have to get down from their vehicles on the roads that have turned into muddy pools to push out the vehicles often stuck in the slushy mud.

The road connecting Tamenglong to Tamei sub-divisional headquarters is also in a dilapidated condition worsened by the incessant rainfall.

He said that the company has been maintaining the lifeline road from Kaiphundai to Tousem sub-divisional headquarters and Tamenglong to Namtiram and Tousem road. However, frequent mudslides continue to damage the roads, he said. He appealed to the citizens of Tousem and Tamenglong to bear with the situation where the company cannot execute the work and could not achieve the targets.

Several parts of this hilly region have long been suffering due to poor connectivity and deplorable road conditions. Till today, motorable roads are yet to reach some of the far-flung interior villages.

Meanwhile, Manipur Chief Minister N Biren Singh on July 6 said the state will witness a massive change in the road infrastructure after the rainy season.

"With guidance of Hon’ble PM@narendramodi Ji, strengthening connectivity has always been the priority for the Govt. in Manipur. Soon after this rainy season, we will be witnessing a massive change in the road infrastructure of the state," Biren tweeted on July 6.

The chief minister's assurance came after a massive landslide hit the NF Railway worksite and the Indian Army company location atop a hill at Makhuam village in Noney district, which was once part of Tamenglong, on the intervening night of June 29-30. The tragedy claimed over 50 lives.

It is hoped that the chief minister will fulfill his commitment to the people of the state and Tamenglong too will soon witness massive change not only in road infrastructure but also uninterrupted power supply and telecom service at the earliest.

Tamenglong, known for its rich biodiversity and beautiful mountainous landscape, remains cool and green throughout the year. It, however, continues to reel under total blackout for long days and often remains totally cut off from the rest of the world.