Hit hard by COVID-19 ban, Manipur musicians sell their instruments as they struggle for livelihood

Since March end 2020, the initial stage of the COVID pandemic in Manipur, restriction on social gatherings, including musical concerts and Thabal Chongba (traditional festival dance form of the Meetei community), was imposed by the state government

Majority of professional musicians in Manipur, like in other parts of the country, are struggling to make a living as COVID-19 pandemic has jammed live shows and all musical performances, which is their main source of livelihood. With the government ban on musical concerts and in the absence of financial help from any quarters, some of them have started selling their musical instruments to get some money to run their families.

Since March end 2020, the initial stage of the COVID pandemic in Manipur, restriction on social gatherings, including musical concerts and Thabal Chongba (traditional festival dance form of the Meetei community), was imposed by the state government as a preventive measure to contain the spread of Coronavirus in the state.

Slight relaxation was observed during February and March 2021. However, on March 27, Chief Minister N Biren Singh announced a complete ban on musical concerts and Thabal Chongba in the state.

Musicians contribute 90 per cent of musical performances. However, the recognition they get is low compared to that of singers. And they get less paid. The audience is unable to understand such a perspective, said general secretary of Apunba Manipuri Matam Ishei Kanglup (AMMIK) Mayengbam Dhananjoy while speaking to the Imphal Free Press.

Dhananjoy said the only means of livelihood of musicians of Manipur is the income generated from performing in a musical concert and Thabal Chongba. A musician in the state earns around Rs 10,000-15,000 per month. Altogether, 55 orchestras are registered with AMMIK. An orchestra has around seven to eight members, he added.

“I have sold my drum as it has been lying useless since the starting of the pandemic. I need cash to run my family,” said Huidrom Boicha, drummer of Tonic Band, speaking to the Imphal Free Press.

Boicha from Kongba, Imphal East has been running his family for more than a decade from the income earned from playing his drum. He along with his wife and three children are struggling for their livelihood since the starting of the pandemic.

“By selling drums it does not mean I have quit my profession. I need cash for running my family so I sold it. Once the pandemic is over, I will find a way to purchase a drum and start over,” said Boicha.

Considering that stepping into another profession may affect his music career, Boicha is still waiting with hope that the pandemic will end soon and everything will come back to normal. He said his wife has also started reselling products on “Meesho,” a smartphone app to earn some money.

Another drummer of Saa-Laai Band Rabi Sarangthem of Chingmeirong, Imphal East has been struggling for his livelihood since the past one year.

“I recall the day where I played my drum during the Thabal Chongba festival at Heingang in March 2020. I received four Rs 500 notes which was the last time I earned by playing my drum,” said Rabi. 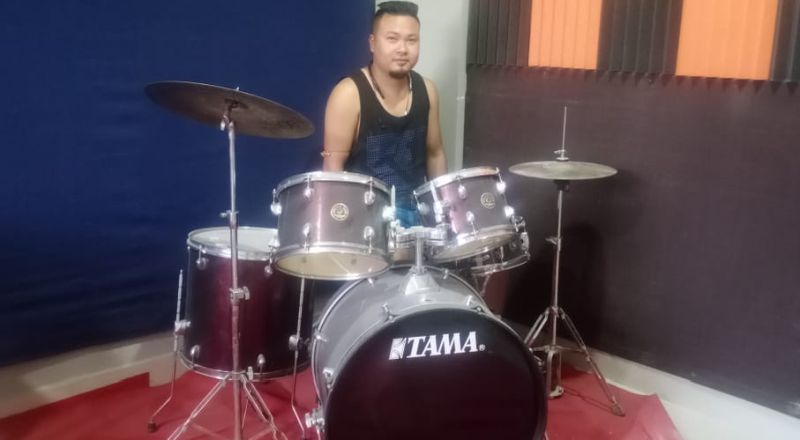 Unable to perform live shows, he has been taking up several odd jobs to survive the pandemic time.

“Since then, I have taken up many odd jobs in my locality to earn a living. Luckily, I got a part time job as a driver for a doctor this month,” he said.

Rabi further said, “However I am still in debt of a large amount of money which I have borrowed from relatives and friends to bear my ailing mother’s medical expenses. Hope the pandemic ends soon and everything becomes normal.”

When asked about plans to sell his drum, he replied, “The drum is a part of me. Although the government bans musical concerts, I will never stop practicing it.”

According to the general secretary of AMMIK, the talent of an artist will slowly go to waste if the person stopped performing.

As most of the musicians are dedicated to their profession, they do not engage in other activities for livelihood, he added.

Considering the suffering of the musicians during the pandemic, he stated that AMMIK has submitted several representations to the then Arts and Culture Minister L Jayantakumar, requesting to take up necessary policy programmes for musicians, however the state government is yet to come forward.

Dhananjoy also asserted that none of the musicians of Manipur had received the benefits of the state scheme launched by CM Biren--Chief Ministergi Artistesinggi Tengbang (CMAT).

Thousands of musicians in Manipur, who liven up the lives of the people and formed a major chunk of the entertainment industry in the state, have been struggling for their living during this COVID-19 pandemic as they do not have other means of livelihood. Amid the second wave of the -pandemic and the worsening scenario, they continue to remain unrecognised and a neglected lot. However, they hope the state government will someday address their plight.