The monolith engraved with the names of the 21 exiled and five war heroes who were hanged was unveiled on Friday during the inauguration of the Memorial Complex of Exiled Heroes of Anglo-Manipur War.

After 130-long years, unsung heroes of the 1891 Anglo-Manipur War (Khongjom Lal) were honoured with their names engraved in a monolith erected alongside Shaheed Minar at the Bir Tikendrajit Park, Imphal, Manipur.

The monolith engraved with the names of the 21 exiled and five war heroes who were hanged was unveiled on Friday during the inauguration of the Memorial Complex of Exiled Heroes of Anglo-Manipur War by the newly sworn-in Governor Ganga Prasad.

The height of the Exiled War Heroes memorial stone is 20 feet, while the height and width of the monolith is 10.5 feet (from the back) and 16 feet respectively. 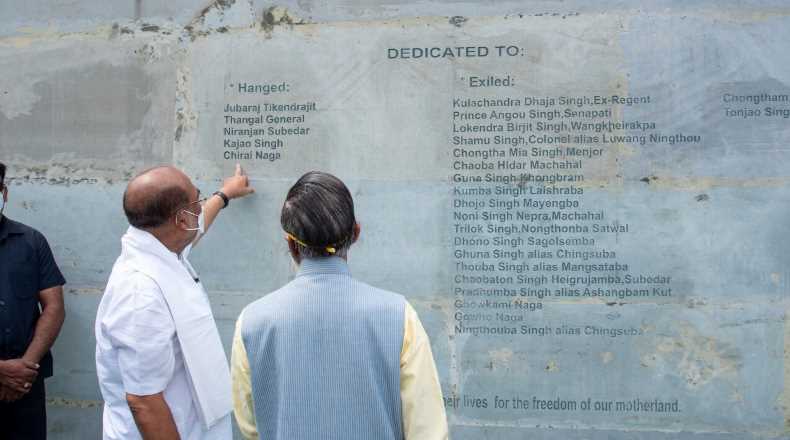 The names of the unsung heroes excluded in the list will be considered for engraving in the monolith if documentary evidence is submitted to the government, Arts and Culture director Ngangom Uttam told the Imphal Free Press.

Chief Minister N Biren, while inspecting the work site of the memorial complex of the exiled war heroes on August 11, had also informed the public that anyone who has information of unsung heroes can submit the details to the Arts and Culture department for consideration of their names to be engraved on the monolith.

As there are "inconsistencies" in the recognising of the unsung heroes, the government need to take up a comprehensive research work to find out the exact details and figures of the unsung heroes, assistant professor (Social Work), Indira Gandhi Tribal University, Shukadev Hanjabam said, speaking to this IFP reporter.

Pointing out that most of the spellings of the names of unsung heroes are written according to the British pronunciation, he said, "So the spelling of the martyrs’ names written in the state government records are not correct."

In order to extract more details and information of those unsung heroes, the government can track down their family members using their vast resource, suggested the assistant professor.

Sharing his team research work on the unsung heroes of the Anglo-Manipuri War, he said various source indicated that altogether 23 people from Manipur were exiled at Kala Paani (Andaman and Nicobar) after Manipur lost the battle to the British Army.

As their resources were limited, they were able to track down family members of only six unsung heroes during their research work, he added, and he drew the attention of the state government to the need of taking up a comprehensive study with maximum efforts to recognise and honour the patriotic spirits of all those unsung heroes.

During the inauguration, the state also witnessed the first presentation of the song Sana Leibak Manipur after its recognition as the state song of Manipur in the gazette notification published on August 12.