Doing away with prejudiced perception of jobs

Defying the prejudiced perception against taking up physically demanding jobs when one secures a government job, one Moirangthem Roshan in Manipur has set an example by following his passion of running a fruit garden.

Apart from the 500 plants of dragon-fruit, his garden also houses other fruits such as lemon, mango, papaya, guava, litchi, apple, hog plum etc. Rather than wasting lands by planting Sambal-Lei (local shrub plant used for fencing), Roshan fenced his garden with stink-bean plants. His garden also houses many other rare flower plants. 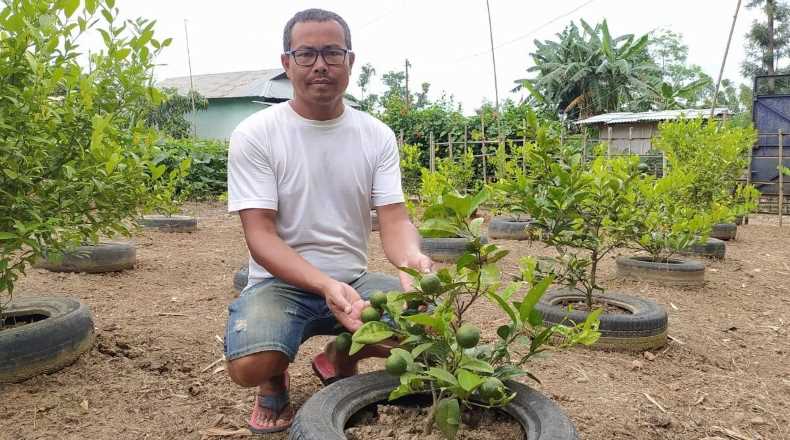 A government school teacher by profession, Roshan works as an Arts Graduate teacher at Lamding Higher Secondary School. He is an avid believer in helping those in need and living together. He also believes in the practice of self-reliant way of living.

With his passion project of the fruit garden, he said that he plans to educate and inspire the people to pursue a life of self-reliance.

In an exclusive interview, Roshan recalled that he always had his passion of gardening ever since he was a child, but he never dreamt of running his own fruit garden. He continued that since he was in class VII he would plant fruits and flowers during his leisure hours.

Roshan said, “Although as a government employee, we should not keep a prejudiced perception on physically demanding jobs. By tending to our available lands and planting vegetables, fruits and flowers we can produce better products for ourselves.”

He highlighted how gardening is not only good for the environment but beneficial for one’s health as well.

“By tending to our own lands and producing products for business purposes we can create our own occupation, and with this we can also help stop the influx of foreign products thus boosting the economy of the state,” he added.

Roshan mentioned that he had always wanted to let the people be aware of the monetary benefits of such projects. And rather than wishing and waiting for the change, he opted to be the change and started his fruit garden journey, he continued. He added that he also wanted to set a practical example for the youths to follow.

He recalled that he and other like minded enthusiasts started the ‘Green Revolution Wangjing’ the previous year. He mentioned that Dina Oinam from Oinam Sawombung, Zico Takhellambam from Naharup Pangong, Boboy from Langahtel in Thoubal district were some of the inspirations in his journey.

Roshan expressed that a seller will always gain from the buyer, and also will be able to live a more fulfilling life. “Rather than planting impractical plants, planting profitable plants can help us create our own livelihood by selling the products,” he added.

Roshan continued that in his garden of 30 points (local measurement), 10 points are occupied by dragon-fruit plants while the rest of the lands are used for planting other plants for domestic uses. He added that in the previous three years he was able to earn revenue of 1 lakh from selling only the dragon-fruit plantlets.

He recalled that he first learnt of dragon-fruit on social media, and upon searching he came across one Nongthombam Nimai from Wangjing SK Leikai who is also a successful dragon-fruit planter. He said that when he started planting the fruit in 2018 only five plants survived, but currently he has around 500 plants. He mentioned that he has sold around three lakh dragon-fruit plantlets till date.

He opined that a culture of office goers tending to their gardens and producing useful products in order to develop a self-sustaining society should be developed. This will also diminish the prejudiced perception towards physically demanding occupations such as farmers and cultivators, he added.

He expressed his desire for the plantation of fruits and medicinal trees during the initiatives to save the environment.

“Let our work be our worship, let us use our physical potentials and stop it from being wasted,” he said. He urged the people to let go of our prejudiced perception on physically demanding occupations and treat every occupation with the respect it deserves.

Moirangthem Roshan who is also an executive member of Like Minded Group said he had been extending helping hands to the poor sections of the society. He added that he had been helping the needy ever since he was a child. Helping others does not necessarily require our material possessions, we can help others in many shapes and forms, he added.

Ojit commended Roshan for his initiatives in helping those in need and inspiring the people in spending their leisure time wisely. Roshan had always been enthusiastic in helping the needy, he added, and said people should take inspiration from Roshan’s initiatives and work selflessly for the betterment of the society.