Due to indiscriminate exploitation, annihilation of forests and changing scenario of rural standard of living, the bamboo of Manipur is in the process of continuous degeneration. 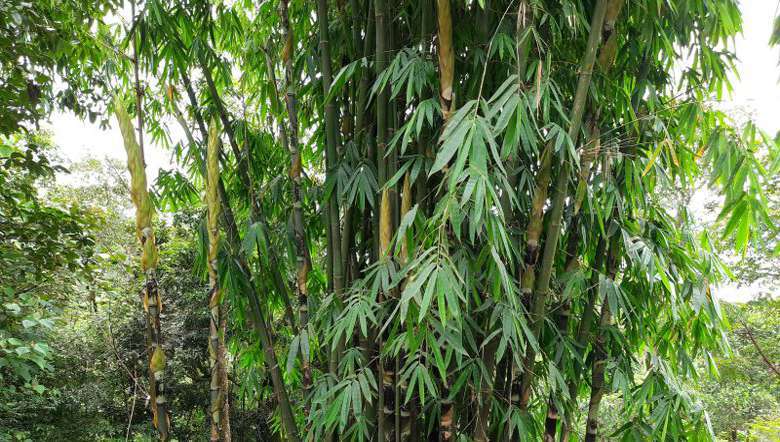 Manipur, a state in Northeast India, is known as “The Land of Jewel or Switzerland of East/India”, due to its breathtaking blue hills, charming scenery and natural endowments. Its assorted topography and distinctive climatic conditions, fashioned diverse forest types in the state i.e. Tropical Semi Evergreen, Dry Temperate Forest, Sub-Tropical Pine and Tropical Moist. By virtue of these speckled climatic surroundings, various species of bamboos are found flourishing here, both in hills and in the valleys. In Manipur, approximately 3268 sq km area is under pure bamboo brakes which is 18.6 per cent of the total forest area of the state and nearly all the bamboo species of North-Eastern India are found nurturing here. Hollow woody culms, widespread rhizomes system, elaborate branching and erratic flowering are some of the unique characteristics of this poaceae family members.

The Green Gold of Manipur

In Manipur, it is a part of its ethnicity to raise bamboo in homesteads as they provide vital uses for subsistence of rural livelihood. The want of bamboo subsists from childbirth to death as they are used in house construction, fuel, fodder, food, tools, religious ceremony etc. In forest fringe villages of Manipur, dependency on bamboo is much more than any other part of the state not because of its multipurpose use only but because it is associated with their legends also. Due to this, foremost species of bamboo have been selected and preserved by dwelling ethnic and tribal communities and thus it is rightly to say that they are the real protectors of forests biodiversity.

The role of bamboo in the life of Manipuris

There are 51 species of bamboos in Manipur. Out of these UTANG, UNAL, SANEIBI, MARIBOB, KHOKWAA, MOUBEEWAA, WAAK etc. are popular bamboo species in Manipur. Bamboo plays a vital role in the life of Manipuris in their day-to-day requirements. It has multiple uses and is used in almost all the household needs for construction, craft, fencing, rituals, firewood, rope, food, utensils and paper manufacturing. Rice prepared inside tender hollow bamboo known as UTONGCHAK, that is full of flavor is offered to guest during festive occasion. Bamboo shoots both in raw and fermented form are largely consumed by the people and can earn a large share of household economy. Bamboo shoots locally called USOI are young tender culms of the bamboo plants arising from the underground rhizomes.  They have been used as an important food ingredient in this region since ancient time and constitute a range of delicacies. During rainy season, all the bamboo species produce young shoots which are harvested from forest and home gardens and are used for domestic consumption. Not only in fresh form but bamboo shoots are also consumed in various forms. The raw/ fresh shoots are known as Soidon or Soijin and fermented bamboo shoot as Soibum. The fermented form (Soibum), owing to their unique aroma and texture are very popular and consumed profoundly in the state. Annual consumption of 2188 tons of fresh (Soijin/ soidon) bamboo shoots and 114.3 tons of Fermented ( soibum)  shoots have been reported from the state. Despite the tremendous popularity of bamboo shoots as traditional food resource in the state for long time, only 15 species are available on the extend of its edible species.

The heart value of Bamboo shoots of Manipur

According to experts and researchers bamboo shoots of Manipur are gaining worldwide popularity because of its nutrient components, high fiber and low fat content. According to them, the bamboo shoots have good amount of proteins, amino acids, carbohydrates, fiber and low amount of fat. Protein content ranged from 1.88 to 3.25 gm. per100gm fresh weight of bamboo shoots. Young edible bamboo shoots are rich in various mineral elements such as calcium, potassium, sodium, iron, selenium etc. Bamboo shoots are labeled as a heart protective vegetable because of its high content of potassium that helps to maintain normal blood pressure and a steady heartbeat. In fact, bamboo shoot is one of the most precious medicinal plants found in Manipur because of medicinal values present in its young shoots.

There is no end to the use and utility of bamboo. Bamboo craft is traditional Manipuri craft and is intricately entwined with the Manipuri lifestyle. It is extensively practiced in almost every Manipuri household. Not a single day of a villager’s life goes by without the use of bamboo in different forms. Bamboo is found to be used myriad ways to create large varieties of articles which are more or less used in the day-to-day lives of the natives of Manipur. The products produced by artisans here are not only aesthetic in look but are also highly functional in nature. Unfortunately the practices of this crafts have now reduced considerably. Among the North-East states, Manipur ranks second in terms of the production of various bamboo crafts, the first being  Tripura. The bamboo crafts of Manipur have a huge variety that range from traditional to modern creations. Crafts like Sofa Sets, Murahs, mats basketry, tray, chairs, table, flower vase, ashtray, headgears, ornaments, bamboo combs, smoking pipes, musical instruments, umbrellas, pitchfork, bows and arrows, anklets and wristlets and other decorative and utility articles. Many of the parts for the loin –looms, fly shuttle looms etc. are made of bamboo. The bamboo craft of Manipur in fact may be classified as decorative bamboo craft, utility bamboo craft and commercial bamboo craft. Moreover Manipur is also known for its beautiful baskets created by tribal people for their own use.

A bamboo can grow easily with least labor and time. Cultivation aspect are least considered. The high potential can be improved by suitable scientific intervention and local capacity building, which will have great implications in improving the socio-economic status of community. Bamboo resources will not only increase per capita income of the state but also the life of rural household. Till date the management of bamboo resource has many constraints with lack of post-harvest treatment and technology for product development, inadequate trained manpower and inadequate infrastructure for large harvesting in the event of gregarious flowering. Protection of bamboo plants in forest fringe villages have not been received proper attention, in terms of diversity, distribution and utility pattern. Also due to indiscriminate exploitation, annihilation of forests and changing scenario of rural standard of living, the bamboo of Manipur is in the process of continuous degeneration. Thus there is urgent need to document and determine the present status of bamboo species growing in fringe villages, so that the measures can be taken well in advance to conserve this “GREEN GOLD” of Manipur.