Orange growers of Tamenglong district in Manipur have been facing severe hardship due to little or no yield. However, the state government has failed to address the plight of the orange growers till date.

For the past few years, Manipur's Tamenglong district which is known for its sweet oranges has been experiencing decay and loss of revenues from the fruits. Orange growers of Tamenglong, Tousem sub-division and Tamei sub-division have been facing severe hardship due to little or no yield. Their woeful stories may tell only half the truth. Despite the plight of the orange growers, the response from the state government is either null or minimal.

For one 74-year-old Ngimlungbe Newme, an orange farmer in Manipur’s Tousem sub-division, pruning is the only option to save his dying orange trees after an unknown pests attacked his orange farm. The disease spreads at the root of the trees, and then the leaves begin to fall away. Finally the trees degenerate, he said.

“I’ve tried applying lime and iodine to kill the stem-borers. But it was not effective in most of the cases. So I finally opted to prune the trees,” says Newme.

His neighbour also witnessed some forms of white patches or powder like pests (Cottony cushion) attacking his trees. Even if the orange trees produce delicate flowers all over the branches, and even if they yield some fruits, they will be small in size sans the sweetness.  The leaves would turn yellowish and finally wither away, he added.

Tasinang Gangmei from Tabanglong village of Tamenglong district who was awarded the first prize for the best orange grower in the last Tamenglong Orange Festival also share that his orange tree leaves are falling, the peels are thick with little amount of juice. As such he is not going to sell the fruits this year, he said.

Another orange cultivator Mathiudin of Pallong village in Tamei aub-division also has a similar story.” I have about 100 orange trees. But the leaves are turning yellowish and facing a lot of issues,” he said. The fruits are small in size with unusually thick peel.

It may be mentioned that a state-level Tamenglong Orange Festival is held every December with much fanfare to promote high quality oranges found in the region and to provide a platform for the orange growers to market their produce. During every Orange Festival, prizes are given away to the best orange growers in the district in an effort to encourage the farmers. Following it, the number of orange farms and farmers have been growing through the years. However, this year proved to be a more difficult year for the orange growers, as a strange infestation seems to have affected orange cultivation. 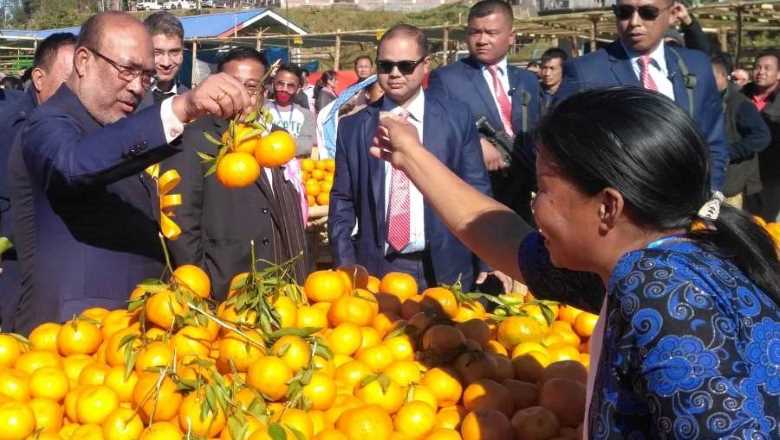 The chairman of Mandeu village, Hangrangba Newme said that there are 120 households in the village, and each household has an orange farm. But since 2007, the plants began to show signs of pathogens and are dying and dwindling in numbers. So they are looking for alternative sources of income for the village. Villagers at Tamei sub-division also share the same plight.

Although the reason behind the above issues is yet to be established, the cause of dwindling orange trees along with the ‘Tree Bean’ (Parkia / Yongchak) points to the historic event of bamboo flowering that began about two decades ago in the hill districts of Manipur, according to village elders.

An elder from Tamenglong village, Nambichuang said, "Bamboo flowering comes back as a cycle in about 100 years'. When it returns, the oranges and tree beans would wither away. But after a few years new plant would appear with much more vigour and yield.” This context is seen to be happening at Tamenglong district now.

Unfortunately, this issue is not being given any attention by research groups of the state or the country. Although some new trees have regenerated from the karma of the past, many farmers are still haunted by the past nightmares.

According to another farmer from Tousem sub-division, his oranges seem to grow better in the soil which has some layers of rock beneath the topsoil. Others felt that grazing of cows in their farms seemed to clear up growth of other bushes and herbs, and hence the orange trees thrive better in such an environment.

Now, except for villages like Sibilong, Mandeu, Taningjam and Azuram, orange trees are withering away fast at Tousem sub-division. Villages in Tamei Sub-division are witnessing the same adversity. Chaton village in this sub-division had good yields for the past decades while the trees in other villages were shriveling to death. But by 2020-21 the village began to experience the same fate. In this regard, president of Horticultural Development Society Tamenglong (HOST), David Panmei said that during the past Orange Festivals they had toured some villages with the officials of the Horticulture Department of Manipur. They had given them some advice to check the problems. But follow-up actions were not taken up by the department.

"We have requested for a Rejuvenation Programme from the state government. But we didn’t get any positive responses till date," David lamented.

An orange grower from Tamenglong village, Charles Liangdiang had urged the ICAR scientist to come and observe his plants at the farm. They were surprised to find infestations at the roots of the trees. Charles also made a hint that many birds that used to feed on the worms of the trees were shot by the villagers, and hence the plants were opened to various forms of worms’ infestation.

Oranges and the economy of farmers

Oranges are the main source of income for the farmers of the villages in Tamenglong district which is known as the producer of best oranges in the state. Since the fruits are harvested mainly in the winter season, the farmers sell them for expenses for Christmas and New Year celebrations. From the proceeds, they can also take care of their children’s admission in the next academic year. A full grown good tree can yield up to 5000 fruits. A pack of 10 oranges are usually sold for Rs 100. At this rate, a farmer who owns 100 orange trees is able to fetch some lakhs of Rupees as income from his farm.

The GI Tagging of Tamenglong Orange is expected to add value to the fruit. The recognition of the worth of this fruit, and consequent sponsoring of the so-called Orange Festival at Tamenglong has added extra value to this mandarin. The 16th State Level Orange Festival was last held on December 16, 2019 at Tamenglong HQs with Manipur Chief Minister N Biren Singh as the function chief guest who came along with the Horticulture Department officials of the state. Needless to mention here that the festival missed the wood for a tree as attention of the people is inclined more for extravaganzas at the Orange Festival. In view of the Covid-19 pandemic, the Tamenglong Orange Festival was not celebrated in 2020 and 2021.

According to the Manipur Organic Mission Agency (MOMA), under the Department of Horticulture and Soil Conservation, oranges of Tamenglong are grown in about 400 hectares altogether. Average weight of each fruit is 232.76 grams. Juice content of the fruit is calculated at 45 per cent. Most of the orange peels of Tamenglong are thin, and hence people opted for such fruits.

At this juncture, it must be noted that the effects of global climate change have impacted even the remotest part of the world. Tamenglong is not excluded. Unfortunately, many farmers are not aware that their orange production is also affected by the changes in the climatic condition of the world. However, a grower from Merrylane in Tamenglong village, Nathaniel R Panmei said that the condition of his trees has been showing signs of fluctuations for the past decade. If a particular year’s yield is optimum, the next year’s yield will not be the same consequently. Hence, he suggested that a change in climatic condition could be linked to this phenomenon.