Gearing up for elections

IFP Editorial: We are still not certain how the BJP is going to fight the elections early next year as its allies NPP and NPF seem bent on fighting it alone instead of pre-poll alliance. 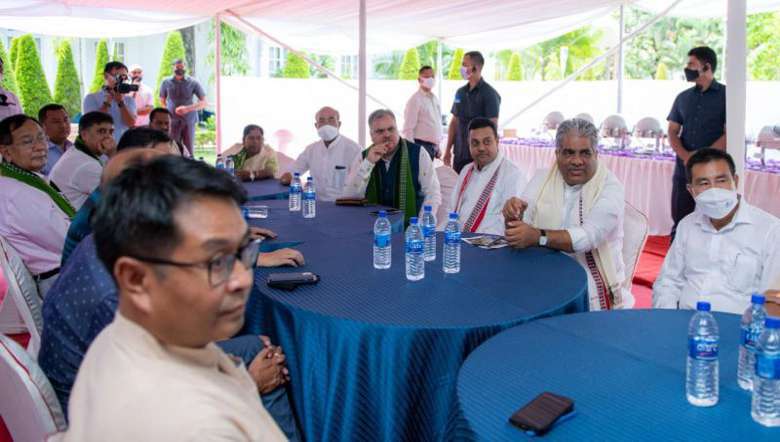 UNION ENVIRONMENT Minister and incharge of Manipur 2022 elections Bhupendra Yadav and his two lieutenants landed in Imphal on Saturday to take stock of the election preparedness of the party and went back the next day. Bhupendra Yadav is no stranger to Manipur politics and he is a trusted party colleague of the Narendra Modi-Amit Shah combine as he was once assigned as an observer to solve the infighting between Chief Minister N Biren Singh and other CM aspirants. Yadav spelled out the party’s strategy for the ensuing assembly elections as he said that the party will fight on the development agenda and is looking for a two-third majority in the assembly.

We are still not certain on how BJP is going to fight the elections early next year as its allies NPP and NPF seem bent on fighting it alone instead of pre-poll alliance. The other day, NPP chief and Meghalaya Chief Minister Conrad Sangma came to Imphal and announced that the party is going to put up more than 30 candidates in the 2022 assembly elections. On the other hand, given the ball thrown by the chairman of Hill Areas Committee for amendment of the ADC Act and the churning it had caused, NPF seems an unlikely partner in the elections.

State assembly elections had never been much about issues or political parties, but mostly about personalities or who doles out more. Yes, there were occasions when issues of the state took centre-stage in the elections. The 1972 assembly elections was one such occasion when statehood brought the regional party Manipur Peoples Party (MPP) to power. After a few years, party-hopping came into the scene with MLAs changing party loyalties at the drop of a hat which heralded the era of anti-defection law.

Once again, the movement for territorial integrity in the state was instrumental in propelling the present Chief Minister N Biren Singh and former MP Meinya Singh of Democratic Revolutionary Peoples Party (DRPP) into the state assembly in the 2002 elections. In the 2007 state elections, the Congress was successful in projecting itself as a party committed to a gradual lifting of the controversial Armed Forces Special Powers Act, 1958 as it had withdrawn it from the Greater Imphal area after the 2004 anti-AFSPA movement.

The anti-AFSPA movement ignited by the Manorama incident not only led to lifting of the Act from the Greater Imphal area which has seven assembly constituencies, but restoration of the Kangla Fort over to the state government by the then Prime Minister Manmohan Singh. In 2010, the Okram Ibobi Singh defied the then Union Home Minister P Chidambaram in stopping the NSCN (I-M) supremo Thuingaleng Muivah from entering Manipur at Mao Gate and the steadfast stand taken by his government perhaps helped him in returning to power once again for the third time in 2012 state assembly elections.

But come 2017 elections, the BJP election machinery came in full force on the anti-incumbency factor and the issues of corruption scandals and fake encounters and managed to overturn the tables, though not fully. So, the coalition government led by BJP seemed like a rag-tag group with its own infighting for leadership consuming most of its time and resources. Now, the 2022 state assembly elections are just round the corner and this time Congress bashing is certainly not the selling point.

Its alliance with NSCN (I-M) powered Naga Peoples Front (NPF) in the government and the recent ultimatum of a proposed ADC bill has all the portents of a hill-valley divide widening and influencing the state elections.

The Armed Forces Special Powers Act may never figure in the ensuing elections. But, the proposed ADC bill has all the hallmarks of a showdown between the hill and valley politics. How the BJP handles it will be a matter worth watching? After Senapati, some powerful Tamenglong CSOs have come out in the open to protest the much-hyped Go to Hills 2.0 campaign. How N Biren Singh skirts it will be watched.