To hold the election in time is mandatory as per constitution rule but at the same time it is also necessary to stay prepared for prevention of COVID-19 third wave, the Speaker said.

The speaker made the appeal during a valedictory function of Community COVID Care Centre at Manipur College, Singjamei, Imphal West.

Attending the function as chief guest, Khemchand said that with the approaching of the general election of the state, election fever has started rising gradually and people sometimes tend to violate COVID-19 protocols. To hold the election in time is mandatory as per constitution rule but at the same time it is also necessary to stay prepared for prevention of COVID-19 third wave. As such, everyone should encourage holding the election in low key.

"If we happen to conduct the coming general election like pre-COVID days, it would be like inviting COVID-19 third wave in the state. It would be good for all if the election is not held in a festive manner," said Khemchand.

Stating about the COVID Care Centre that was opened in Manipur College from May 5 with the onset of the second wave in the state, he said that with the help of selfless volunteers, health professionals and with cooperation from various sections of the society, the centre could run successfully for more than three months. 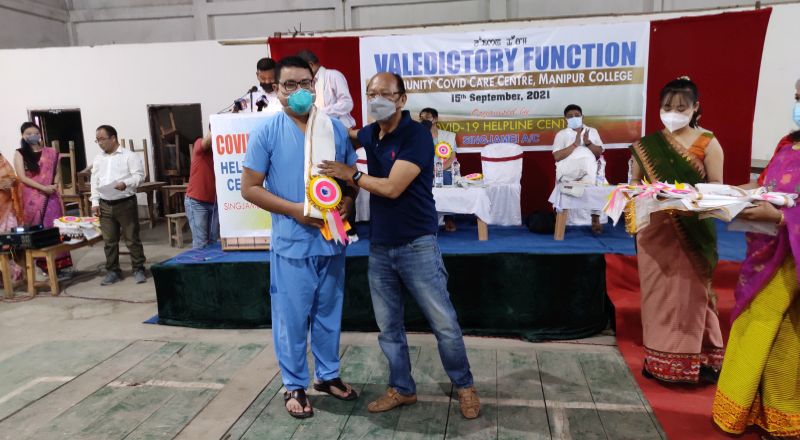 "The kind of humanitarian service extended by our volunteers to 1,042 inmates of the centre is highly commendable. I would say that they are brave souls as the centre was set up when the state was hit hard by the second wave. During that period, they took maximum risk of their lives carrying COVID-19 infected patients on their back without even wearing PPEs. The kind of service they rendered will be unforgettable," the Speaker said.

As a part of the programme, doctors, nurses and helpers who played an important role in running the CCC successfully were felicitated.

The quarantine centre was set up in Manipur College by volunteers from Singjamei assembly constituency during the first wave. It was closed down for some period with the decrease of COVID-19 cases in the state. However, with the sudden surge of COVID-19 cases since April 2021, the COVID Care Centre was reopened under the leadership of concerned MLA, Yumnam Khemchand on May 5. The CCC was set up in two places, one at Manipur College and another at Chingamakha High School. In these two centres, altogether 1,042 COVID-19 patients were admitted.