Gone with the wind

IFP Editorial: The rousing welcome and reception given to Olympic silver medallist Saikhom Mirabai Chanu led by Chief Minister N Biren Singh himself and the crowds on the road, it was a story of curfew violations and inappropriate Covid-19 behaviour. 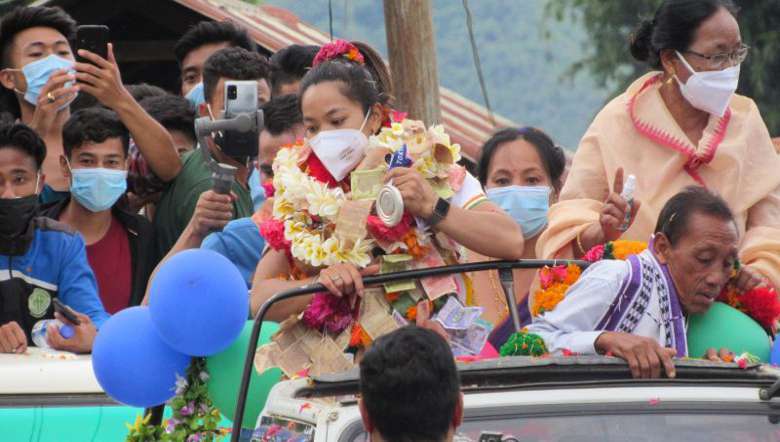 Never had we seen such a spectacle since Manipuri boxer Ngangom Dingko Singh won the gold medal at the Bangkok Asiad in 1998 in the bantam-weight category. The euphoria then in Manipur was not only of a Manipuri boxer winning the gold medal but also of a victory against the Indian selectors then who had initially dropped him from the Indian squad. He made the cut after registering a protest. In those days, Manipuri sportspersons however talented rarely make it to the Indian squad due to both lack of patronage and discrimination. Dingko Singh’s fury and determination in the 1998 Asian Games changed all that and the rest is history. When Dingko returned to Imphal after his victory, it was a spectacle never seen before in the streets of Imphal. The road from the Imphal airport on the Tiddim Road was lined up with euphoric crowds who jammed the streets to get a view of the hero and cheer him all the way. That day, Imphal rose in unison to celebrate not only his achievement but his defiance of the Indian selectors. His singular achievement of an Asian Games gold in the 1998 Bangkok edition was India's first in 16 years. But bigger than that was the impact he had on those who watched him out-punch two Olympic medalists that year. A fearless competitor in the ring, Dingko beat two Olympic medallists -- Sontaya Wongprates of and Timur Tulyakov of Uzbekistan -- en route to the Asian Games gold. Timur Tulyakov, whom Dingko Singh defeated in the final, was World No 3 then.

The spectacle this Tuesday when Olympic silver medallist Saikhom Mirabai Chanu returned to Imphal was a little subdued, but the curfew restrictions were thrown to the winds in the euphoria. The welcome at Delhi Airport when she touched down from Tokyo was also euphoric. Manipuri weightlifter Saikhom Chanu Mirabai had won the first medal for India in the Tokyo Olympics on the first day, a feat after Karnam Malleshwari won the bronze medal in weightlifting in 2000 Sydney Olympics. Indians celebrated it as if it is their own. While Dingko’s gold campaign at the 1998 Asiad inspired the budding boxers of India, Manipur’s sports journey took a turn for the better and the state became a powerhouse of Indian sports no longer to be shunned or ignored. Mirabai had the complete support of the Indian sports establishment in her endeavours. Now, we are banking on the results of the doping test of the Chinese weightlifter Hou Zhihui who won the gold medal. Mirabai lifted a total of 202 kg (87 kg in snatch+115 kg in clean and jerk), three kilograms lower than her personal best of 205 kg. Zhihui lifted eight kilograms more (94 kg in snatch+116 kg in C&J) than her Indian counterpart. The Indonesian lifted 194kg (84 kg snatch+110 kg C&J). In the snatch event, which was seen as Mirabai's Achilles' heel prior to the big event, she lifted 84 kg in her first attempt and then improved it by three kilograms in her next attempt. The 2017 world champion Mirabai continued her good show in the clean and jerk section by lifting 110 kg in the first attempt and then setting a new Olympic record by lifting 115 kg. However, the record was soon broken by Zhihui as she lifted 116 kg in her third attempt after she lifted 109 kg and 114 kg in her first two attempts respectively.

Now coming back to the rousing welcome and reception given to the world champion led by the Chief Minister N Biren Singh himself and the crowds on the road, it was a story of curfew violations and inappropriate Covid-19 behaviour. At the Imphal airport, she was mobbed by the over-enthusiastic crowd of fans when the chief minister garlanded her and it was total chaos with even the security personnel joining in the joyous mayhem. On the way from the airport, the streets were lined up with joyous crowds cheering her while flouting everything in the Covid-19 rule book. Last we pray that, besides the post of Additional SP (Sports) she should be gifted with a plot of land in Imphal city. Of course, she will be given a government quarter commensurate with her post for now.