Now, we are serious about the curfew

IFP Editorial: This time, the civil society organisations and local clubs seems supportive of the state government move to impose total curfew and we see local clubs collaborating with the law enforcing agencies in imposing the curfew restrictions. 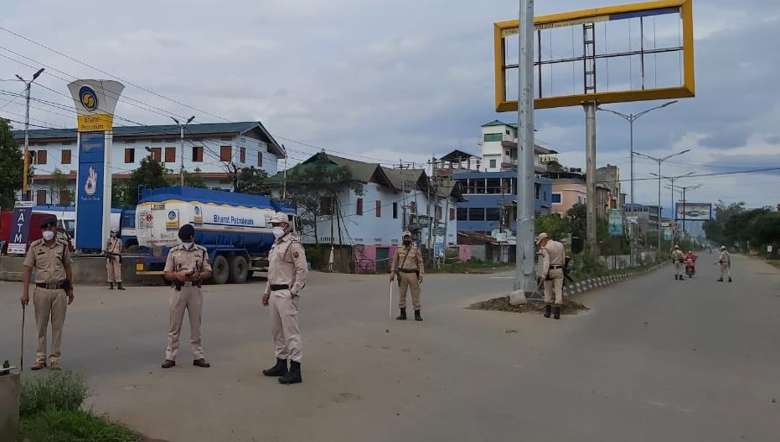 This time, the state is really serious about enforcing the curfew restrictions. Police patrols have intensified and few people or vehicles are seen in the streets on Sunday. The 10-day total curfew was imposed in the whole state of Manipur in an effort to break the chain of transmission and contain the unabated second wave of the COVID-19 pandemic. The state witnessed peaceful response as all establishments and markets remained closed and normal life was brought to a complete halt. The streets in all districts wore a deserted look as all shops and establishments remained closed and vehicles kept off from the roads. Manipur has been witnessing daily Covid-19 positive cases surging above the 1000-mark. The total number of Covid-19 confirmed cases is inching closer to 85,000, while the total number of active cases has reached 9,676 and the death toll touched 1,376 as of Sunday. On Sunday, the number of positive cases had come down to 963 with 11 deaths. We hope, the total curfew except for a few relaxations would bear fruit. Manipuris have a curious sense of curiosity. Whenever a bandh or curfew is in force, people usually come out of their homes to see for themselves if it is really working. If there is movement on the streets, they will join the bandwagon. When the decision for enforcing a 10 day total curfew was announced late Thursday evening, the streets were clogged with heavy traffic with people coming out in large numbers for buying stocks for the ten day lockdown or for some other business. And police had a very difficult time in controlling it.Luckily, the streets wore a deserted look on Sunday and we pray it remains so in the coming days.

This time, the civil society organizations and local clubs seems supportive of the state government move to impose total curfew and we see local clubs collaborating with the law enforcing agencies in imposing the curfew restrictions. On the other hand, the opposition Congress seems to be questioning the wisdom of imposing total curfew towards controlling the spread of the pandemic while remaining silent on any other alternative other than curfew. We agree that, it is wrong of the state not to take into confidence the opposition in the consultation process of combatting the pandemic. But, it should not become a cause of criticising the government move for the sake of criticism and it should act as a responsible opposition. On the other hand, the state speaks in so many languages. The Health Director Dr K Rajo says, there is no cause for panic as the surge in positive numbers is due to aggressive house to house testing which have successfully resulted in flushing out the hidden positives. He said that only four persons have died while being treated under home isolation. Month wise, the maximum number of death cases was recorded in May 402 fatalities. In June, 343 deaths were reported while from July till today, 200 deaths have been recorded. District wise, Imphal West has the highest number of Covid fatalities while Pherzawl has zero death cases. At hospitals, JNIMS has recorded the highest number of deaths with 288 and RIMS has recorded a total of 258 deaths. According to IDSP studies, from April to June, a total of 776 deaths were found.  Of 492 death cases, 410 were found to be non-vaccinated persons while tracing their backgrounds.

If there should not be any cause for panic among the general public about the surge as Dr Rajo says, why is the need for imposing total curfew. As we understand, the basic cause of rapid spread of the second wave is because of the high transmission rate of the Delta variant being airborne. The curfew would certainly check the spread among the general population in the streets, but spread within the family members and surroundings will continue, as more enhanced by the caged atmosphere of the curfew.