Only one Arts graduate teacher was there for higher classes, while two primary and two matriculate teachers were employed for taking the lower classes.

The long cherished dreams of Chingjaroi Christian Village (CV) in north of Ukhrul district was finally fulfilled with the inclusion of Eastern Christian High School (ECHS) Chingjaroi CV under the second Phase of School Fagathansi Mission of the Manipur government, which aims to provide infrastructure developments and other important facilities to the selected schools in the state.

The Imphal Free Press had conducted an investigation concerning the functioning of ECHS at Chingjaroi CV and reported its findings on March 7. During the investigation, it was found that the school was running without a headmaster and adequate teaching staff for more than a decade. The headmaster in-charge has been looking after the affairs of running the school.

Only one Arts graduate teacher was on duty for higher classes, while two primary and two matriculate teachers were employed for taking the lower classes.

The state deputy secretary Education/(S) T Phulen Meitei had issued an order on June 17 for implementation of the second phase of ‘School Fagathansi Mission’ to 60 Schools under Education (S) department, Manipur for development of infrastructure, civil works like repairing and renovation of class-rooms, construction of toilet blocks and additional class rooms, provision of dual desk and benches including arrangement of posting of teachers etc.

“This has been the long fervent prayers of the villagers. Today, the wait is over,” Rocky remarked. He also urged the authorities concerned to maintain quality in taking up infrastructure development works.

“For the good of younger generations, we will ensure that quality work and the required teaching and non-teaching staff are maintained so that this government high school continues to produce qualified students and good citizens,” he said and appealed to the state government to make frequent inspections of its functioning.

He also appealed to the state government to look into the poor condition of the school as it is facing acute shortage of staff and infrastructure despite the fact that it is one of the oldest surviving government high schools in the district.

Prior to the pandemic, much to the dismay of the students and villagers, of more than the 20 assigned teaching staff, only five reported for duty while the rest remain largely missing in action. Where have the rest gone is a question on the minds of many.

The youths of the village have been volunteering in coordination with a few staff to ensure that the learning environment of the student is not left to chance.

The second wave of the COVID-19 pandemic had further complicated the academic atmosphere of the students due to the closure of all educational institutions.

With many poor parents especially in rural areas having no means to purchase smart phones, there is no way their wards could afford online classes. Network is another worrisome factor. Even if some of them manage to buy smart phones, they still do not have time as the majority of them are farmers. 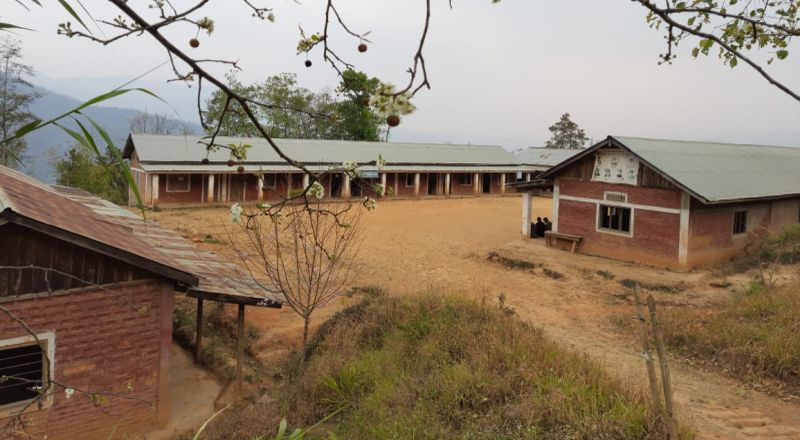 ECHS was established at Chingjaroi CV in North Ukhrul district in 1962 with the sole aim to provide quality education to the children of far flung villages. It was also found that ECHS had produced quite a number of distinguished personalities in various fields, and used to be the hub of education for many neighbouring villages.

Given its long standing reputation of providing a helping hand to the poor sections of the populace and its proximity with neighbouring northern villages, and Poumai villages, the Eastern Christian High School could have been upgraded to higher secondary school by now.

But let alone upgrading the status, ECHS is in existence in name only for want of adequate teachers - primary as well as graduate teachers.

It was found that rampant culture of substitutions and non-reporting for duty at the assigned village have been one of the major factors impacting this government high school.

Absence of duly appointed trained and qualified teachers from their assigned place of posting is the main issue plaguing the government school.