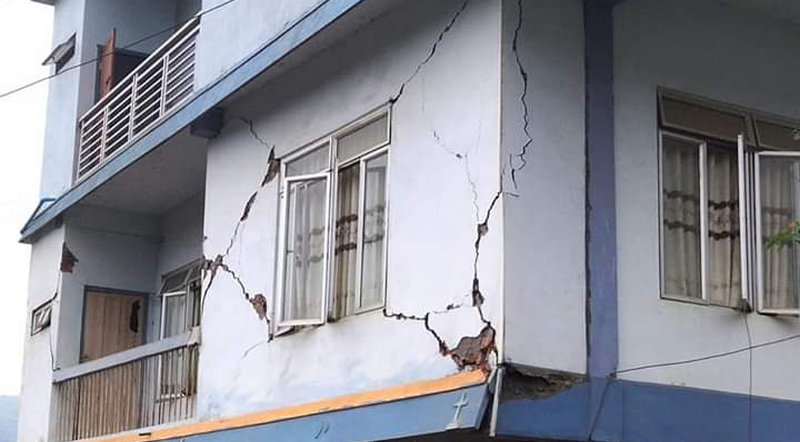 The earthquake caused damage to several houses and buildings, including a church at Zokhawthar in Champhai district (PHOTO: Twitter/@ZoramthangaCM)

In the wake of the earthquake that jolted Mizoram on Monday, Prime Minister Narendra Modi and Union Home Minister Amit Shah spoke to the state Chief Minister Zoramthanga and assured to extent all possible support from the Centre.

"Spoke to the Chief Minister of Mizoram, Shri @ZoramthangaCM Ji on the situation in the wake of the earthquake there. Assured all possible support from the Centre," PM Modi posted on Twitter.

The home minister also dialed the chief minister to review the situation and assured to extent support while praying for the safety of all.

"I have spoken to Shri @ZoramthangaCM ji, Chief Minister of Mizoram, to review the situation after the earthquake tremors in the state. I assured him all possible support from the central government. Praying for everyone’s safety and well-being," Amit Shah tweeted.

Meanwhile, CM Zoramthanga thanked the PM Modi and Shah for their assurance of support and said that risk management is underway.

"Two earthquakes rocked #Mizoram within a span of 12 hours. Damage assessment undertaken by concerned MLA and district administration. Fortunately, no casualties reported so far. Thanking the Hon'ble Prime Minister and Hon'ble Home Minister for their assurance of support," the CM tweeted.

An earthquake of 5.3 magnitude jolted Mizoram early Monday morning, causing damage to properties. However, no casualties have been reported so far, reports said.

According to the National Centre for Seismology, the epicentre of the earthquake was located at Zokhawthar in Champhai district on the India-Myanmar border.

This is the third earthquake reported in the state in the past few days. On Sunday, a 5.1 magnitude earthquake hit the state at 4.10 pm, and on June 18, another 4.6 magnitude quake was felt, according to reports.