Many flout COVID-19 SOPs on Hanuman Jayanti despite surge in fatalities, positive cases

Hundreds of followers of Hinduism on Tuesday thronged the Mahabali temple to offer prayers to Hanuman Thakur on Hanuman Jayanti. 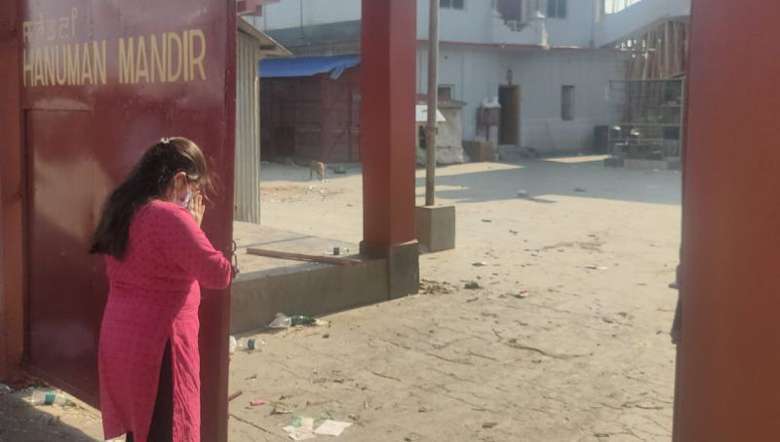 A woman believer offering prayer at the entrance (PHOTO: IFP)

Amid the sudden rise in Covid-19 positive cases and fatalities with the second wave hitting hard, hundreds of followers of Hinduism on Tuesday thronged the Mahabali temple to offer prayers to Hanuman Thakur on Hanuman Jayanti, at Imphal in Manipur.

The standard operating procedure (SOPs) and guidelines for safety against Covid-19 apparently go down the drain as the visitors were seen not maintaining any physical distance and many turn up without face masks.

While the state government did not issue any prior warnings or prohibitions in connection with the observation of Hanuman Jayanti, negligence on the part of the public is also witnessed, which is worrying during this chaotic times.

People started gathering at the Hanuman temple in Mahabali since morning to offer prayers and the number of visitors soared to hundreds by 11 am.

Later in the afternoon, around 2:30 pm, a team of Imphal East police dispersed the crowd and prohibited further entry of visitors inside the temple to avoid probable spread of Covid-19.

Those who came to pray afterwards were made to return after offering their prayers at the entrance.

ASI M Pramesh of Porompat Police told the Imphal Free Press that the police prohibited further entry of visitors as many of them failed to abide by the Covid-19 SOP and COVID Appropriate Behavior issued by the Central government.

With so many people, including the old turning up, there is a huge risk of contracting the virus in such a large crowd, the ASI added.

Meanwhile, head pandit of Mahabali Temple, Chunikeshwor Sharma said that over 1,000 people gathered at the Mahabali Temple on Tuesday to offer prayers to Lord Hanuman on the occasion of Hanuman Jayanti.

In the past years, on this day, a carriage with Hanuman was drawn in the city especially in the market area and with the money offered by the people in doing so, foods were bought for the monkeys.

However, the practice was cancelled this year in view of the Covid pandemic situation but foods were arranged for the visitors and devotees after the prayers in the morning, the temple head pandit told IFP.

The head pandit also said that many of those who came to pray violated Covid-19 SOPs and guidelines despite being told to follow them strictly to prevent the spread of the disease.

It would have not been a problem had the visitors maintain the SOPs and guidelines, Sharma added.

The state on Monday recorded its highest single-day COVID-19 fatalities in 2021 as five more persons succumbed to the viral infection in a span of 24 hours, according to the release issued by the state health department. With it, the state's cumulative COVID-19 death toll rose to 390, according to the update from the COVID-19 Common Control Room.

As the state continued to witness an alarming surge in the daily new COVID-19 positive cases in the wake of the second wave of the pandemic, Manipur recorded another highest single-day spike yet again on Monday. A total of 146 people, including five personnel from the Central Armed Police Force (CAPF), tested positive for COVID-19 in the state in a span of 24 hours, the release stated.

Mahabali Temple in Manipur, dedicated to Lord Hanuman is located near the Imphal river at Wangkhei in Imphal city area. Every year, Hindu devotees in the state throng the temple in large numbers to offer prayers on the occasion of Hanuman Jayanti.

15 people fined, sent to three-day jail for not wearing mask in Imphal