What is happening in Myanmar - the bizarre turn of events

The protests against the military takeover in Myanmar, which initially began with a few civil disobedience movements, have now turned to a violent and deadly crackdown by the military. 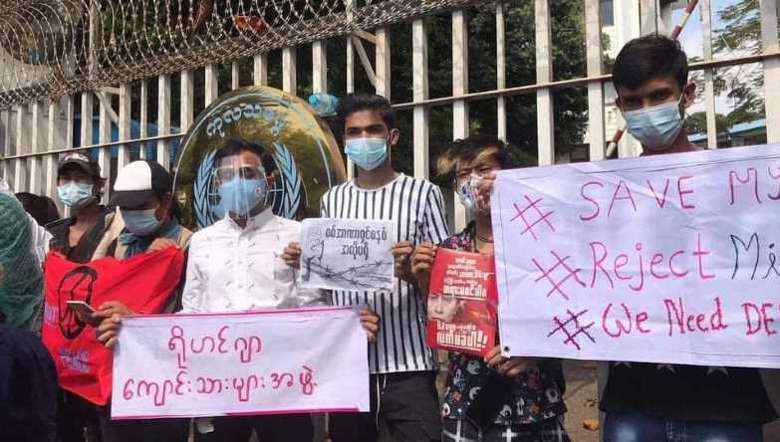 Since February 1 2021, India's neighbouring country, Myanmar, has been undergoing a perilous political event, an event that brought 10 years of democratic journey to an abrupt end. The military declared a state of emergency for one year citing electoral fraud in November 2020 elections in which the ruling National League for Democracy (NLD) party won a narrow landslide victory.

In a bizarre and strange turn of events, part of the coup was caught on video as a fitness instructor was performing her routine in front of the Parliament. What followed was a series of arrests of elected members, including the leader of the NLD, Aung San Suu Kyi who has since been charged with breaking the law. The military on its part continues to justify that they will hand over the government to whoever wins the new multi-party election, purported to be held in the coming year.

Since the military takeover of the government, people in Myanmar have been protesting and demonstrating in the streets, demanding the return of a civilian government. These protests, which initially began with a few civil disobedience movements, have now turned to a violent and deadly crackdown by the military.

To make sense of what is happing in Myanmar and to bring awareness to these current issues, the North East Christian University, Dimapur, and Yanglushidi Sensaksem Sabang arranged a special webinar session on the present political crisis in Myanmar: “What is happening in Myanmar.” The distinguished speakers for the webinar were prominent public intellectuals: Salai Isaac Khen (National League for Democracy, NLD), former Minister of Development Affairs, Electricity, and Industries, and currently at the Myanmar Institute of Theology; Layang Seng Ja, faculty at the Kachin Theology College and Seminary, member of Civil Disobedience Movement (CMD); Nang Swan Piang, Principal at the Tedim Christian College, Yangon; and Pau Lian Mang, Professor at the Tedim Christian College, Yangon.

The webinar brought to light many of the decisive issues about the current coup and demonstrations in Myanmar. Khen, who served as a minister from Aung San Suu Kyi’s National League for Democracy (NLD) party, discussed the role of the military in Myanmar politics where about 25% of seats in parliament are reserved for the military junta, as well as the control of key cabinet positions such as Defence, Home Affairs, and Border Affairs. The military takeover of the civilian government took place on February 1st 2021, and since then, according to Dr. Piang, more than 500 people have lost their lives in the ongoing demonstration against the military. The civilian government and the people are hoping for a peaceful resolution to the transitioning of power, but the military seems to have dropped the idea of this peaceful transition of power when it indiscriminately resorted to using rubber bullets and live ammunition against the protesters.

There is a growing urge among the people in Myanmar as well as the members of the civilian government for an international intervention before the country descends into chaos and becomes a failed state. Yet, despite intensifying military brutality and tense situations in Myanmar, people continue to bang their kitchen pans as a sign of protest every evening from 8:00 to 8:15 pm. Violence has not stopped the brave men and women in Myanmar to show their resentment towards the brutal and underhanded approach of the military to take over the government.

Amidst such chaos and civil unrest against the military takeover, the religious institutions are working hand-in-hand and in solidarity with the people of Myanmar. As Nang Swan Piang asserts, since the military coup, the Archbishop of Yangon Myanmar, Myanmar Christian Convention, Methodist Convention in Myanmar, and the Association for Theological Education in Myanmar have all issued public statements condemning such rash acts by the military.

Numerous churches and their members have in solidarity taken part in demonstrating and street protests, and organizing prayer meetings. One glaring example is a video showing Reverend Sister Ann Rose Nu Tawng kneeling and urging the soldiers not to shoot the protesters. To the people in Myanmar, this public demonstration has become a fight between justice and injustice, a fight between good and evil, Piang argues.

As the military crackdown continues, people, especially from the ethnic minorities, such as the Chin, Kachin, Karen, Shan, and Mon, are fleeing into neighbouring countries (India and Thailand). In India, people escaping Myanmar military prosecutions are fleeing into the North Eastern states of Mizoram and Manipur. Even though the Government of India (GoI) has been reluctant to take in these refugees and internally displaced people, the state of Mizoram has taken a courageous step in urging the GoI for Mizoram to take in people escaping the fury of the Myanmar military prosecution; while the state of Manipur has politely said “no” to take in people fleeing violence. This has also put to question the intention of India in terms of its relationship with the military junta in Myanmar and has blemished India’s stand in terms of its humanitarian consideration, Seng Ja argues. Yet, despite its apparent limitation, Mang, however, urged the people of the North Eastern states to continue to lend help and open their doors for those who escape prosecution under the harsh military crackdown.

The intensifying military crackdown is now the new normal, especially in those regions inhabited by ethnic minorities. Seng Ja, for instance, mentions how the military surrounded and investigated Kachin Theological College and Seminary on March 13, 2021 at 10:45 pm. She later, after the fact, was told that her name was on the wanted list because of her involvement in the Civil Disobedience Movement against the military coup. She is lucky to have escaped the clutches of the military that night. But many are not as lucky or fortunate as her. Since then the theological seminary remains closed and the students are taking a refuge in a safe place where they are also given basic military training, in case a civil war breaks out between the military and the ethnic groups.

Such sorts of political events make one wonder about the fragility and durability of democratic government, which is an enduring philosophical and political question on “which is the best form of government,” “how best to organize a political community,” justice, power, legitimacy, authority, liberty, etc., that has occupied the minds of some of the greatest thinkers in human history. Such fragile political events also bring to our awareness and make us realize how not to take for granted the enormous freedom, the liberties (in terms of speech, thought, press, communication, civil society organizations, etc.) we enjoy, guaranteed by the Constitution of our country. For we see people dying and sacrificing their lives to attain and retain that which we take for granted. At the same time, we are empathetic and do feel remorseful by sharing a sense of humanity by opening our doors to those escaping brutal and intensifying military crackdowns in Myanmar, because we never know when we may need and require such assistance ourselves.

US suspends trade deal with Myanmar