IFP IMPACT: Barely four days after the Imphal Free Press published a video entitled 'How timber transport is being carried out unchecked in broad daylight in Tamenglong', Manipur Forest and Environment Minister Awangbou Newmai announced setting up of a drone unit to check illegal activities 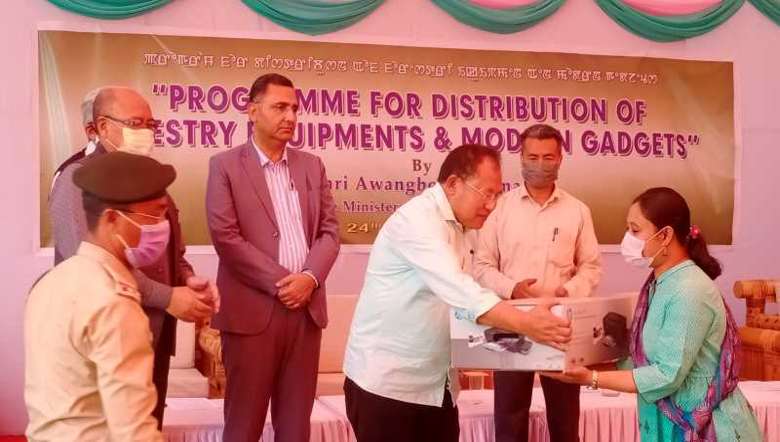 The Manipur Forest department is gearing up to set up a "Drone Squad" unit to monitor illegal activities, including timber trade, being carried out in the reserved forest area of Manipur, said Forest and Environment and Climate Change Minister Awangbou Newmai.

The announcement came barely four days after the Imphal Free Press published a video entitled 'How timber transport is being carried out unchecked in broad daylight in Tamenglong'. The video, highlighting massive timber logging in the forest area of Tamei sub division, was published on March 20, 2021.

The minister, speaking at the 'Programme for Distribution of Forestry Equipment and Modern Gadgets', said compared to other states of India, the Manipur Forest department is still working much better in preserving and conserving the forest and wildlife.

The distribution of the forestry equipment and tools was held at the Forest head office, Sanjenthong, Imphal,as a part of the modernization initiative of the forest department,

"We are trying to equip the officials of the department with the latest gadgets and technology for effective conservation of the forest,” said the forest minister.

Asserting that all the transported timber are not illegal, the forest and environment minister stated that those trucks transporting timber without transit pass are confiscated along with the timbers by Forest officials.Any illegal timber transporter will be apprehended, he added

Despite a lot of hindrance and lack of manpower in the Forest department, it is working much better in terms of conserving and preserving the Forest of Manipur following the pro-active contribution of Chief Minister N Biren and efforts of the Forest officials, the minister said.

Further assuring that the state forest will also be secured in the near future, Newmai also thanked the media persons of the state for their contribution in creating various awareness to the public for the protection of flora and fauna habitats in the forest area.

Following the handing over of the equipment, the minister asked the authority of the four handicraft units to utilise the tools and equipment properly and to become successful entrepreneurs.

Urging the public to report to the officials of the Forest department if any illegal activities are taken up inside the reserved forest area, the minister also appealed to the public to cooperate and support the department in saving the forest of Manipur.

The department handed over 46 printers, 29 all-in-one computers, 29 UPS to Manipur Forest Training School for imparting computer knowledge to frontline field staff and other department officials, four drones and two sports utility vehicles (bolero) to the officials of its Division offices.

The minister applauded department officials and staff for their dedication and assured that the department will see better days in the near future.