Speaking as the chief guest of 8th Sadar Hills District Veteran Sports Meet 2021 closing ceremony, Biswajit exhorted the veteran players that they must set an example in terms of discipline, sportsmanship, games spirit and fair play for the youths. 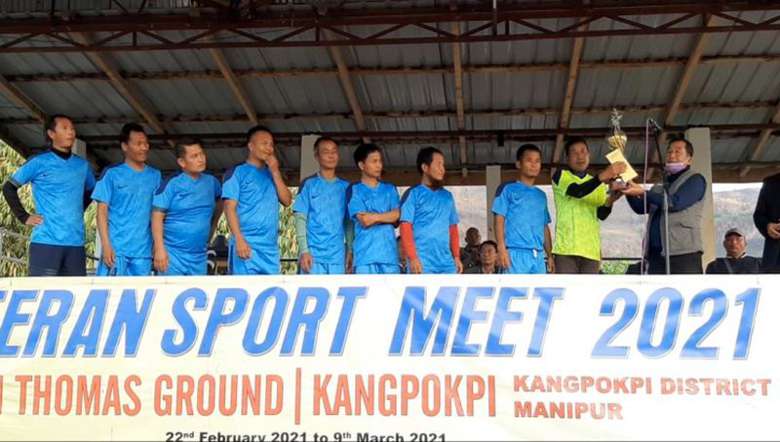 Sports in Manipur has been increasingly developed since the past few years and with such a new trend of sports, it has become a fashion especially among the youths who will definitely help the CM’s 'War on Drugs' mission, Works Minister Th Biswajit Singh said on Tuesday.

Speaking as the chief guest of 8th Sadar Hills District Veteran Sports Meet 2021 closing ceremony at Brig M Thomas Ground, Kangpokpi, Minister Biswajit Singh said that when the youths become interested in sports they will voluntarily eschew drugs so as to remain fit and active.

He also recalled that when the President of India visited the state he declared that Manipur is the powerhouse of sports and it was a proud moment for the people of Manipur especially for the state sportspersons.

He exhorted the veteran players that they must set an example in terms of discipline, sportsmanship, games spirit and fair play for the youths.

He also stressed on various developmental works undertaken by the BJP government and clarified that BJP is not for one particular religion, community, etc. rather it is for all the people irrespective of caste, creed and religion.

The local MLA Nemcha Kipgen who attended the occasion as president said that people of Kangpokpi has been occupied in sports especially football since the past few months and exhorted them to involve in sports for unity not for disintegration.

She said that every football lover should keep in mind that when they lose a game, they must consider it as a stepping stone for success in the next edition.

She encouraged the people to promote game spirit and develop physical fitness and a sound mind.

Former ADC Sadar Hills Chairman Haokholal Hangshing stressed on various important issues and motivated the veteran players to utilize their talents and skills for the development of society.

The final match between J Songtun Area Veteran and Tujang Lhang Veteran was kicked off after inspection of players, and formal opening of the final match by the minister who kicked in a ball inside the ground.

The final match ended in a goalless draw and the champion had to be decided via tie break. J Songtun Area Veteran clinched the champion title after scoring 4 goals in the penalty shootout while Tujang Lhang Veteran managed to score only two goals.

The event was culminated with the de-hoisting of the association flag by former ADC Sadar chairman Haokholal Hangshing.