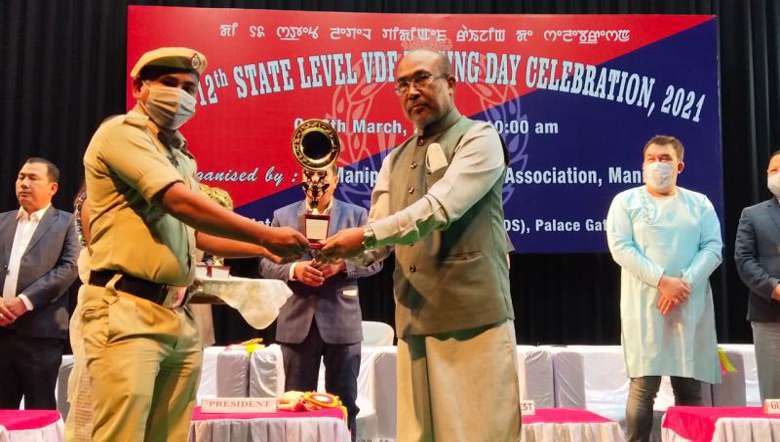 Concerning the difficulties faced by VDF personnel to make ends meet due to their meagre salaries, Chief Minister N Biren Singh on Saturday assured that the government would take up steps to fulfil at least their basic requirements.

The amount of salary received by VDF personnel is not sufficient with the duties they are performing, Biren said while speaking at the function as chief guest. But due to the shortage of money in the state’s exchequer, the government could not fulfil all their demands. However, the present government is trying to fulfill their demand at least to some extent, he said.

The salary for VDF was increased to Rs 10,500, including honorarium though they had urged to increase it to Rs 12,000, he said, adding that the government will try to address their problems from time to time in accordance with the financial condition of the state.

Biren also said that the condition of the state has been improving and moving forward. The role of the police department was immense in achieving this stage, he said and appealed to all the government officials and staff to perform their duties with sincerity and honesty.

“Holding protests and agitations by government officials and staff by forming associations whenever they do not get their demands is very unfortunate. The state will never acquire any form of development until and unless such a culture of ceasing work is no longer followed. As such, officials or staff should think of bringing solutions through mutual understanding instead of resorting to agitations,” he added.

While appreciating the people of the state for taking the initiative to fight against drugs, he said that the war against drugs was launched by the government. But nowadays people have started taking a keen role to make this mission successful as mass rallies are being organised from place to place against drugs.

The government will also start providing alternative sources of livelihood to poppy cultivators to make this mission more successful, he declared.

He also assured of reviving the moral values and discipline which existed at one point of time among the youths, he said.

As a part of the programme, a memorandum was submitted by member of AMVDFWA to the chief minister, demanding to address the hardship faced by them. Awards were also presented to outstanding VDF personnel.