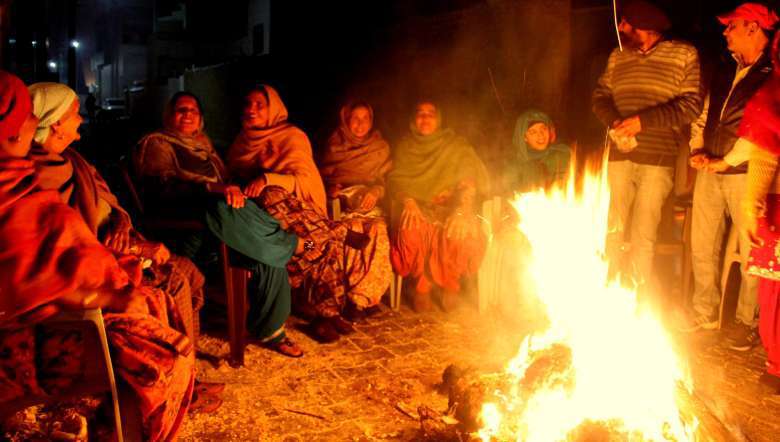 Lohri festival is a popular festival of Punjab providing the opportunity to interact with family and friends. Lohri is a great occasion that holds great importance for farmers. It is a celebration of life and singing and dancing around the fire. Throwing peanuts, puffed rice, popcorn and rewari into the flames form an intrinsic part of the celebrations. Special Lohri songs and folklore are sung together.

In the harvested fields, farmers light huge bonfires and villagers gather around. People wear their brightest clothes and come to dance the bhangra and gidda to the beat of the dhol. In urban areas, bonfires are lit in the community parks where people in the neighbourhood come with their families. Bonfires are central to Lohri and the celebrations revolve around it, adding warmth and cheer in the cold winter night.

Prasad, are offered to the gods such as sesame and items made with it, gajak or sweets made of peanuts and jaggery, moongphali or peanuts, and phuliya or popcorn during Lohri these main items are must. Sarson da saag and makki di roti is usually served as the main course at a Lohri dinner.

Lohri is celebrated on January 13 every year and marks the culmination of winter. The festival marks the end of winter and is a traditional welcome of longer days and the sun's journey to the northern hemisphere by Sikhs and Hindus in the Punjab region of the Indian subcontinent. It is observed in the night before Makar Sankranti also known as Maghi.

Popular beliefs say that the festival is celebrated to mark the end of peak winter. Lohri, however, is also associated with the harvest of the Rabi crops. People also celebrate sheaves of roasted corn in Lohri while gurh and gajak are central in the celebrations. Apart from this, kite flying is also popular on the occasion.

It is believed that the festival commemorates the passing of the winter solstice. It also marks the beginning of the harvest season of Rabi crops in Punjab. People also celebrate Lohri to pay homage to Surya (Sun God) for gracing all with his presence and for the bumper harvest. Some legends also believe that Lohri was Holika’s sister who, along with Bhakt Prahlad, survived the fire while some believe that the festival was named after Loi, the name of saint Kabir’s wife.

Apart from Punjab, Lohri is also celebrated in Delhi, Haryana and Himachal Pradesh. Lohri has been celebrated in Jammu since Mughal times. The festival is observed as Lal Loi in the Sindhi community.