While saying that there is huge demand for raw silk in the market and the raw silk materials can be bought either by the Sericulture department or by weavers, Newmai stated that the beneficiaries need not worry about the markets to sell their products. 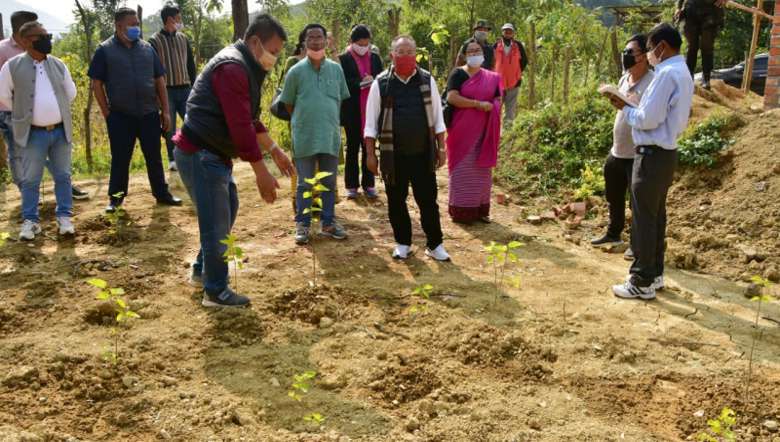 Manipur Minister of Sericulture Awangbou Newmai has encouraged beneficiaries of Seri farms under the Sericulture department to work wholeheartedly to increase the production of raw silk in the State.

During his visit to Seri farms and nursery located at Ishingthembi, Lairok Kom, Yumnam Khunou, Tangkham, Leitanpokpi and Khewa Phurju Pukhao under Imphal East district on Wednesday, the minister interacted with the farmers and listened to their grievances.

Most of the famers were overwhelmed with the minister’s visit as they claimed that it was the first of its kind to them.

One farmer Inaobi from Leitanpokpi village said, “the minister’s visit has encouraged us to work harder since no minister had visited our farm in the past. Had there been any such visit in the past, we would be working even harder.”

Though there are plenty of demands even from NGOs, we could not meet the demands at present, said Inaobi. He also said that he can generate above Rs 20,000 in a month by selling the raw silk.

Briefing the media during the visit, Awangbou said that people can also generate employment and income by practicing sericulture in the state since the government cannot provide employment to all the people.

While saying that there is huge demand for raw silk in the market and the raw silk materials can be bought either by the Sericulture department or by weavers, he stated that the beneficiaries need not worry about the markets to sell their products.

The only problem is that there is not enough production at present. If the farmers work honestly and wholeheartedly, they can get a lot of benefits from sericulture and the demands in the market could also be fulfilled, he added.

The minister assured that the government will try to extend any possible help to hard working farmers.

He also expressed satisfaction after observing the work of the beneficiaries who are working wholeheartedly to produce more raw silk material.

Announcing that he will visit all the Seri farms located in Imphal West and Bishnupur districts within this week, Awangbou said that the purpose of the visit is to know the ground reality and to interact with the beneficiaries to understand the various issues faced by them.

Some of the farmers told that they can increase and speed up production of raw silk if they are provided a reeling machine.

During the visit, the minister was accompanied by director of Sericulture L Kunjakishore Singh and other officers.