MP Leishemba Sanajaoba, who attended as the chief guest was accompanied by former deputy speaker of Manipur legislative assembly MK Preshaw Shimray, former minister Khashim Ruivah and BJP leaders. He made a fervent appeal to the younger generations to preserve and promote the rich culture passed down by the forefathers

“Whatever religion we follow, we must treasure and preserve our culture and traditions,” he said. 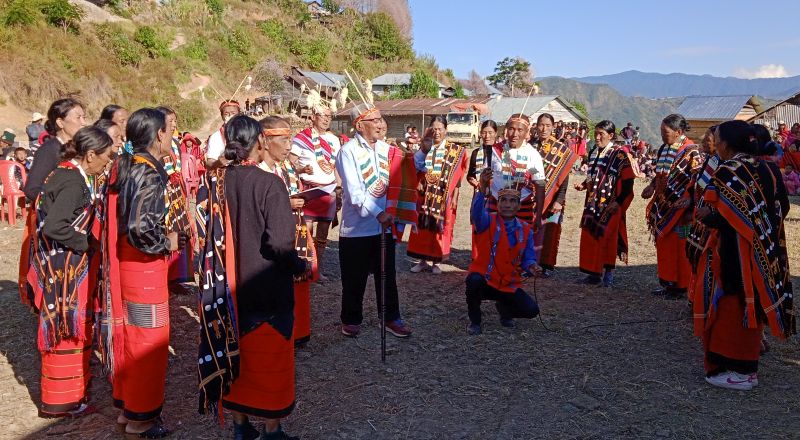 As part of the celebration, traditional items like folk songs, folk dances were performed. He said the ‘Tarung Kashun’ (Totem pole) of Tangkhul and ‘Uk-hong Ungba’ of Meitei bear resemblance.

“Our father and grandfathers narrated the story revealing that Tangkhul and Meitei are brothers. This cultural affinity stands testament to these stories,” he said.

He said that in the Tangkhul customary practice, Tarung Kashun - the totem pole is considered sacred. By virtue of his abundance, the one who shares what he had accumulated through his hard work to the lesser lot in the true spirit of love and extending helping hands to the poor, Sanajaoba said.

Similarly, in the Meitei social set-up too, a man who harvested the maximum food grains and vegetables etc., is honoured and rewarded through erection of stone monolith as he earned the honour by dint of his hard work, he further said.

Along with the due place and recognition earned, he shared the surplus to the poor, sick,and the landless people, he added. He also cited Lai Haorouba festival to drive home the elements of sameness.

He also expressed his gratitude to sitting Chingai MLA Khashim Vashum and intending BJP candidate Ningam Chamroy, who could not make it to the event due to unavoidable circumstances, for their concern.

Meanwhile, the headman wished the titular king success in his pursuits and prayed that the Almighty God grant him a prosperous and long life.

He also thanked the titular king for assuring to construct a playground.

Speaking at the occasion, MK Preshow Shimray who attended as the guest of honour said the forefathers of Nungbi Khullen were known for their surplus food stock and hospitality to the guests. “They had so much that they stored food grains that could last three - four years.”

He said that Tarung Kashun (totem pole erection) as practiced by the forefathers is considered sacred and was an exclusive beat of the eldest and the affluent involving massive rituals of animal sacrifices where the poor were fed and cared for.

“Tarung Kashun instilled in the minds of the people or locals a sense of security, trust and believed that it will be their shield, protector and giver,” he emphasised, adding that the village authority made a historic initiative as it reminded the bountiful life the ancestors had lived in their days through their hard work.

“With the erection of Tarun, let us strive towards self-sufficient, secured and prosperous life by imbibing the hard work and perseverance culture with which forefathers could maintain a bountiful life,” he exhorted, emphasising on the symbolic significance Tarung Kashun holds.