Of the 197 total cases recorded in the state, 133 cases have already recovered and discharged while only 64 cases remain active. 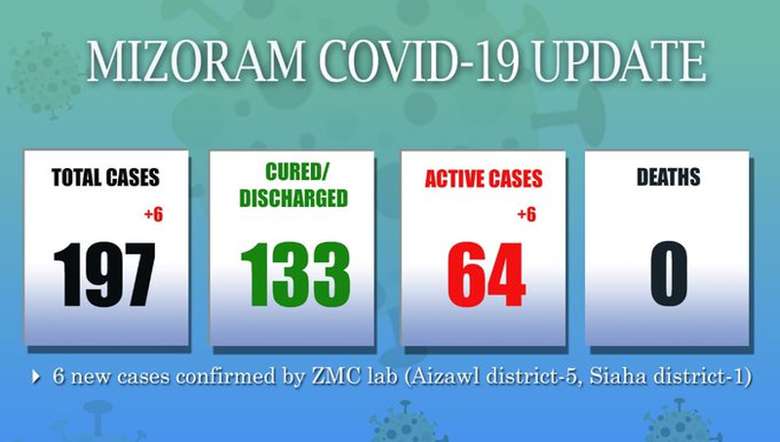 Of the 197 total cases recorded in the state, 133 cases have already recovered and discharged while only 64 cases remain active.

Meanwhile, four more personnel of the Border Security Force (BSF) personnel and one of their cooks were tested positive for the disease in the past 24 hours.

According to the Health department of the state, the fresh cases of jawans tested positive for COVID-19 in Mizoram came after 25 samples were tested for the disease at Lunglei Civil Hospital. They are posted at Vanhne in Lunglei district.

According to the source, the jawans came back from Madhya Pradesh, Assam, Meghalaya and Kerala but the cook has no travel history.

Meanwhile, as the new guidelines of lockdown in Mizoram are being enforced, people are also cautiously carrying out normal chores responsibly.

The new guidelines came into effect from July 1 and will lapse on July 31, 2020.

However, educational and training institutions, entertainment parks, picnic spots, theatres, gymnasiums and other similar places for entertainment will continue to be prohibited till July 31.

Beauty parlours, salons and spas are allowed under the new guidelines in the State with prior appointment of customers to ensure social distancing.

Inter-district movements of people are allowed under the new guidelines. The odd-even number system of traffic continues, except on Sundays.

According to the government order, the partial lockdown became necessary so as to address the economic issues and the hardship faced by the people down prolonged lockdown. The guidelines were made in such a measure that they do not compromise the health safety of the people, the order added.

New features which came under the new guidelines allow book release, sports practice and other similar programmes with a maximum number of 25 attendees.

Border areas, both inter-state and international, continue to be sealed. However, the three entry points---Vairengte and Bairabi along the Assam and Mizoram border and Kanhmun along the Mizoram-Tripura border are opened for transportation of commodities.