The event was held as a part of ‘the Ganga Utsav- a river festival 2021’, which is organised across the country to celebrate ‘Azadi Ka Amrit Mahotsav’.

Nambul Run, 2021 organised by the Water Resources department, Manipur was observed on Thursday morning with an aim to save and conserve the Nambul river.

The rally started from the Hump Bridge (Thong Nambonbi) and culminated at the Keishamthong bridge.

Water Resources Minister Letpao Haokip flagged off the rally, which was attended by hundreds of people. Chief engineer of WRD Albert N Songput and other top officials and engineers of the department also took part in the rally. 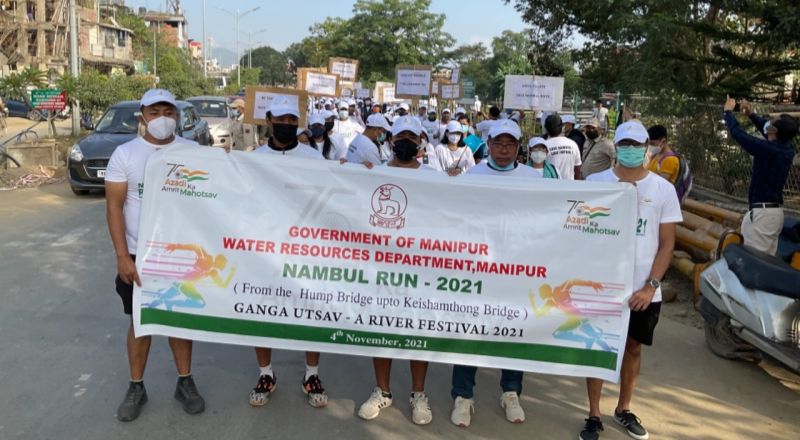 Speaking on the occasion, Letpao Haokip sought cooperation of the general public in saving the Nambul river before it is too late and requested help in restoring it to its original pristine form.

Today’s event was held as a part of ‘the Ganga Utsav- a river festival 2021’, which is organised across the country to celebrate ‘Azadi Ka Amrit Mahotsav’. The main aim of the festival is to establish a sound people-river connection and to build a strong bond with the general public.

Several placards reading captions such as ‘Let’s save Nambul until it is too late’, ‘Stop pollution, save Nambul’, ‘Conserve Nambul, it will conserve you’, ‘Nambul is dying, clean it’, ‘River Nambul is our life, take care of it’, ‘Save Nambul and save yourself’ etc. were used by the participants of the rally.