The awareness cycle ride was led by member secretary, MASLSA Ojesh Mutum with members of Tour de Manipur Riders and it reached out to around 20 remote village.

Manipur joined the rest of the world in observing the United Nations Day with Manipur State Legal Services Authority (MASLSA) in collaboration with Tour de Manipur Riders organising a cycle rally on the theme ‘Awareness Ride on Sustainable Development Goals’ by reaching out to the unreached on Sunday.

United Nations Day, which is annually observed on October 24, marked the anniversary of the day in 1945 when the UN Charter came into force. UN Day, celebrated every year, offers the opportunity to amplify the common agenda and reaffirm the purposes and principles of the UN Charter.

The awareness cycle ride was led by member secretary, MASLSA Ojesh Mutum with members of Tour de Manipur Riders and it reached out to around 20 remote villages of Imphal East, Imphal West, Kangpokpi and Bishnupur districts. The team interacted with a total of around 500 villagers and provided awareness on free legal aid and services. The team also briefed the print and media personnel on legal service institutions and its significance in bringing access to justice for the poor and marginalised persons. 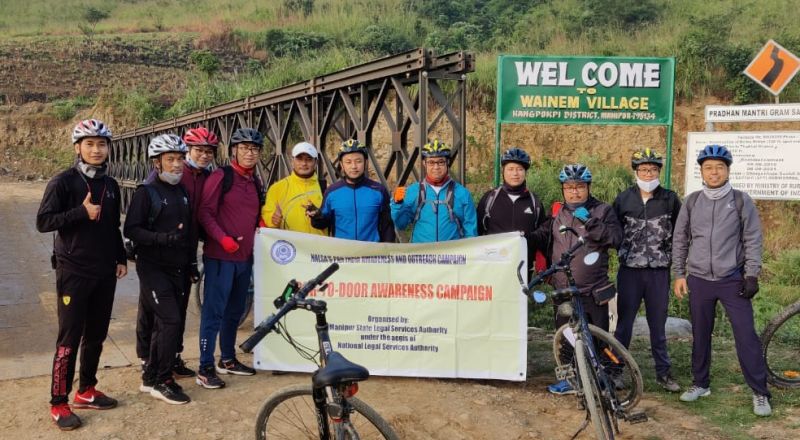 Further, MASLSA also organised a webinar on the theme UN Day and the significance of Legal Services through Jitsi Meet platform from 1 pm to 2 pm for law students, para-legal volunteers and front office functionaries of MASLSA.

He further added that MASLA under the aegis of NLSA is committed to provide free and competent legal aid services especially to the weaker sections of the society so that access to justice is accessible to all. Resource persons Chonchuirinmayo Luithui, centre administrator, OSC, Ukhrul and Ch Momon Singh, advocate and member, MASLSA spoke on the theme ‘Building Back Together for Peace and Prosperity: UN Day and its significance and UN Day and the significance of Legal Services respectively.’

A short legal awareness video on Lok Adalat was screened followed by an interactive session with the participants.