Sadhvi Niranjan Jyoti stressed on the need for Aadhaar linkage for beneficiaries to avail benefits under government schemes.

Following presentations on the work progress and completion from the department officials, the union minister who is on a two-day visit in the state, lauded the rural development works undertaken in the state under the RD and PR department.

Further during the interaction, Sadhvi Niranjan Jyoti expressed the need for Aadhaar linkage for beneficiaries to avail benefits under government schemes.

Citing National Food Security Act, she said that Aadhaar linkage will help beneficiaries in getting rice under NFSA from any place.

She also said that the present government’s focus is to bring the Northeastern states at par with the other parts of the country.

He further highlighted certain issues and challenges faced by the department in the implementation of the schemes.

Meanwhile, earlier in the afternoon, the union minister along with Minister Biswajit and officials of the department attended a Visit and Interaction Programme with members of Self Help Groups under the Manipur State Rural Livelihood Mission at Ningomthongjao Bazaar Community Hall. As part of the programme, food-grains under the Pradhan Mantri Garib Kalyan Anna Yojana and National Food Security Act were also distributed.

Biswajit said, “Today, the people are enjoying benefits from various government schemes. There is also progress in implementation of schemes in the state.” 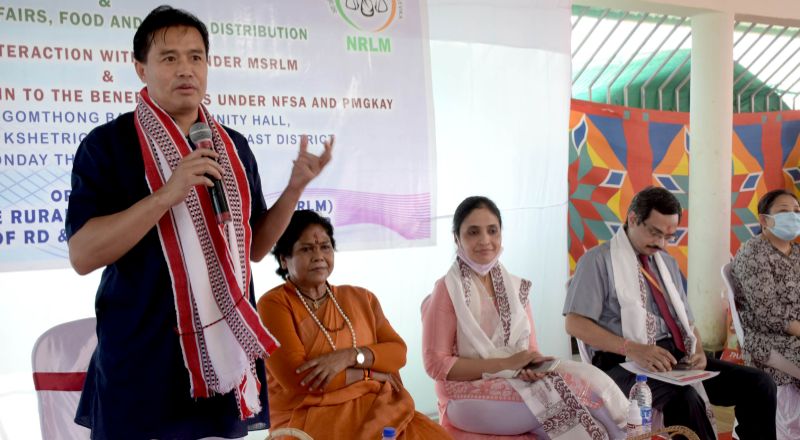 He said that under Prime Minister Narendra Modi, the public received 5 kg of rice under the Pradhan Mantri Garib Kalyan Anna Yojana during the lockdown imposed because of the Covid pandemic.

Addressing members of the SHGs, Sadhvi Niranjan Jyoti said that Manipur has changed a lot since 2016, when she had first visited the state during the launch of the MUDRA loan.

She continued that today’s programme was organised to encourage the SHG members to become more self reliant.

Mentioning that the present government under Prime Minister has shown much concern and interest for the Northeastern states, Sadhvi Niranjan Jyoti also expressed happiness with the development witnessed in the state.

As part of the interaction, 10 stalls showcasing local products made by the SHGs were also opened at the venue. The interaction was also attended by officials of both CAF and PD and RD and PR.