Lenkhohao is a student of Sielmat Christian High School. Does he get time to weave and study? 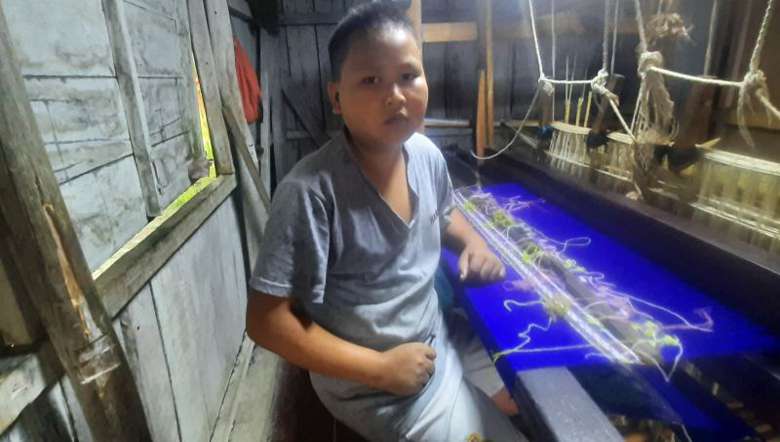 Weaving is mostly carried out by women folk among the tribal communities in Manipur. Men are not known to take to weaving. But Lenkhohao Kipgen, a 13-year-old boy from Koite village, Churachandpur district of Manipur has been weaving Kuki traditional shawls since he was eight.

While he may be too young to be weaving and a boy weaving clothes is a rare sight, Lenkhohao, in a conversation with the Imphal Free Press, says his friends often make fun of him weaving, but he is not ashamed of it. In fact, he loves weaving, he says, adding he developed the love for it while watching his sister weave beautiful Kuki traditional shawls.

Driven by passion, the boy quickly picked up the art of weaving and learned different patterns and designs while visiting other weavers in the locality.

Although he is not weaving for livelihood, he could earn from the shawls he wove.  Some of them have been sold for a price starting from Rs 700. The shawls are woven with traditional motifs and patterns, and he could finish weaving a shawl in two days’ time.

Although weaving a shawl, especially the ones which require different designs, are difficult to make, Lenkhohao can now weave different types of Kuki traditional shawls. The demand for the shawls woven by him is growing but the boy also goes to school and has to find time to study.

Lenkhohao is a student of Sielmat Christian High School. Does he get time to weave and study?

He weaves when he has free time in the morning before going to school and after returning from school in the evening.  After completing his studies, he also weaves at night till 8 pm, he says.

Although he loves weaving, the young weaver also has an ambition to become a government officer in the future. Besides, he also has a plan to teach others how to weave and increase the production. He has started teaching weaving to people who are older than him, he says.

Lenkhohao’s aunt Hahat Kipgen, who is in her 50s, says that a man weaving is very rare in Kuki society. However, instead of staying idle and remaining jobless, men can also weave and earn from it to fulfil their basic needs.

“In olden days, it was believed that men who engage in weaving are unsuccessful in hunting. As such, they were prohibited to weave and no man was seen weaving,” Hahat says.